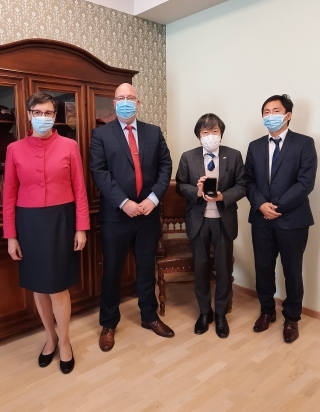 Together with H.E. Mr. Arvo ALLER, Minister of Rural Affairs 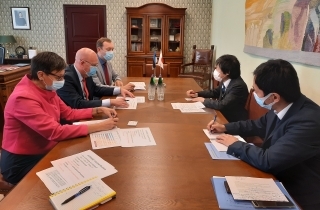 The Minister and Ambassador discussed the possibility of promoting the Estonian export to Japan of dairy products, whose quality is highly appreciated in many countries.
The Ambassador introduced the episode that H.E. Mrs. Kersti KALJULAID expressed her wish to promote the export of the Estonian dairy products personally to the Ambassador, when he proposed the Letter of Credence in October last year.
The Ambassador said that he shall make his best to materialize it.
Then the Minister and the Ambassador exchanged opinions extensively on various subjects, including the industrial structural change in both countries and the influence exerted over the economy by COVID 19.

The meeting finished in a friendly manner with the Japanese Government’s present of “Kiyomizu-yaki” pottery, which was handed to the Minister by the Ambassador.