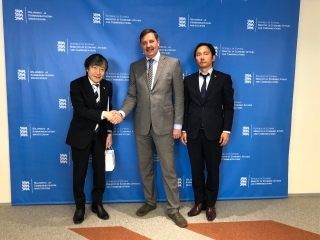 The courtesy call started with Ambassador saying “I was working for the Japanese Embassy in Finland as the deputy head 25 years ago, when I had a chance to visit to Tallinn sometimes. I came back to Estonia as the Ambassador last year, and it was a great pleasure for me to see the miraculous development of Tallinn and Estonia! Also, I was very much pleased that our bilateral friendship has been so much deepened”.
Ambassador also said “the most important challenge for me as the Ambassador is to strengthen the bilateral business relationship, to make the present friendship sustainable and everlasting”.
It was followed by the Minister’s briefing on “Rail Baltica”, a magnificent project, aiming at connecting three Baltic countries and Poland with a railway, on the possibility of under-water tunnel project connecting Estonia and Finland, and on the possibility of “Corridor Project” connecting Sweden and China by the cargo train.

Then Ambassador introduced the change of the energy-mix of Japan before and after the Tsunami disaster in 2011.
Based on this, Minister and Ambassador discussed on the future of Estonian electricity generation by using oil shale or wind turbines, and on the possibility of using atomic energy.
The meeting finished in a friendly manner with the Japanese Government’s present of “Kiyomizu-yaki” pottery, which was handed to Minister by Ambassador.