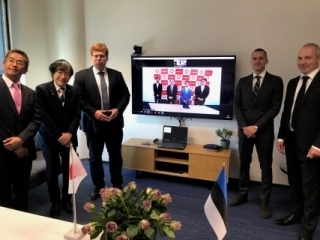 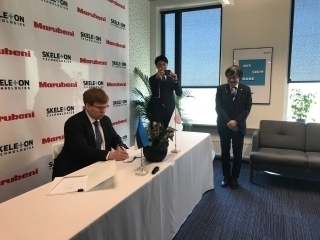 Signature of Skeleton
On 11th June, Ambassador KITAOKA visited Skeleton Technologies, an Estonian high technology company, which is located in Tallinn, the capital city, to make congratulatory remarks for the signing ceremony of the distribution agreement with Marubeni Cooperation, which is one of the biggest trading companies in Japan.
The Ambassador was escorted by two Embassy staff, Mr. Tomoya SHIGENARI, a Second Secretary in charge of economic affairs and Mr. Hiroshi TAKENAKA, Researcher.
With this agreement, Skeleton Technologies’ “Ultracapacitor”, the next-generation electricity storage device, which could be charged much faster than traditional batteries, and could be charged as many as 1 million times, will be exported to markets in Asian countries including Japan!

The ceremony took place, connecting Tallinn and Tokyo online.
From Marubeni, Mr. Masayuki OMOTO, Executive Chief Operating Officer of Next Generation Business Development Division, Mr. Dai SAKAKURA, General Manager of Next Generation Social Infrastructure Department attended the ceremony from Tokyo online.
And Mr. Takao FUKUOKA, General Manager of Tallinn office (based in Helsinki), came to Tallinn to attend the ceremony, together with Mr. Takeshi OMIKA, Business Development Manager stationing in Tallinn.
From Skeleton Technologies, Mr. Taavi MADIBERK, CEO, Mr. Oliver AHLBERG, Chairman of the Supervisory Board and others attended.
The ceremony started with Mr. MADIBERK’s introduction of “Ultracapacitor”, on its excellent performance for multi purposes, followed by a speech by Mr. OMOTO.
Ambassador KITAOKA made congratulatory remarks saying “in this year, when Estonia and Japan are celebrating 100 years of friendship, it is indeed a great pleasure to see a product of Estonia, famous for high technologies, is being exported to Japan. Marubeni has already succeeded in exporting Estonian cheese to Japan, and this time, it has made another success of exporting Estonian high technology product to Japan. It is a great honor for me to share my pleasure and excitement with the other participants today!”.

For the Ambassador, who has always been wishing for the promotion of bilateral trade and investment between Estonia and Japan since his taking office in October in the year before last, this ceremony has become one of the happiest occasions! 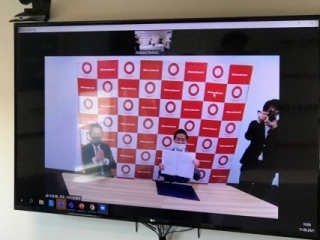 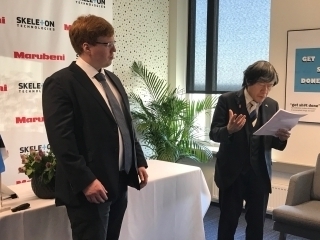