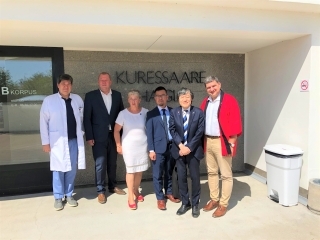 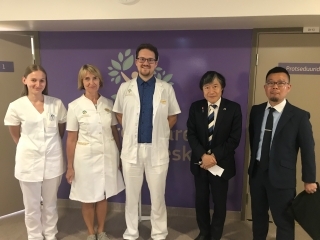 At Kuressaare Health Center
From 26th to 27th of July, Ambassador KITAOKA made his 2nd official visit to Saaremaa Island, the biggest island in Estonia, following his 1st visit in March last year.
He was escorted by Dr. Hiroshi TAKENAKA, Researcher of the Embassy and a medical doctor.

On the 1st day, the Ambassador left Tallinn, the Capital City, in the early morning, crossed to Muhu Island by using a ferry, and arrived in neighboring Saaremaa Island by road.
His first destination is Kuressaare Hospital, the central hospital located in the Capital City of the Island.
Actually the Ambassador once visited this Hospital during his 1st visit to Saaremaa last year, and the main purpose of his visit this time is to learn deeply on EHIS （Estonian Health Information System） with the support of Dr. TAKENAKA, who is also a medical doctor.
The Ambassador, just like his previous visit, was welcomed by hospitality of Dr. Edward LAANE, Head Doctor and known as pro-Japanese, with the Estonian and Japanese flags, a traditional Japanese doll “Hakata-ningyo”, and delicacies of Saaremaa!
His briefing session was also attended by Mr. Märt KÕLLI, Board Member of the Hospital Foundation, and Ms. Tiiu ARO, who was the Chairperson of the Municipality Council when the Ambassador visited last time, and now has become the honorable member of the Parliament (Riigikogu).
The Ambassador, from the bottom of his heart, congratulated Ms. ARO for joining Riigikogu!
Dr. TAKENAKA’s questions, posed in such a lively manner, were all answered in such a meticulous manner by Dr. LAANE, Mr. KÕLLI and Ms. ARO, which has made clear the Estonian Health System and the challenges the Island’s medical service is facing.
It was followed by the guided tour into the Hospital, which is spacious enough to be the Central Hospital of Saaremaa, including a helipad attached to the Hospital.

Then the Ambassador and Dr. TAKENAKA, guided by Dr. LAANE, moved to Kuressaare Health Center, where they were welcomed by Dr. Mari SOOTS, Head of the Health Center, and Dr. Kristen REINMANN, who gave a detailed briefing on the role of the Estonian home doctors or their relationship with their patients.

Finally, Dr. LAANE took the Ambassador and Dr. TAKENAKA to the Care Center Saaremaa Valss, where the old or the handicapped are living their lives.
Ms. Heli KAER, Head of the Center, conducted a guided tour into the Center.
For the Ambassador, who is a father of a mentally handicapped son, this tour has proved to be very fruitful, actually witnessing how the Estonian facility is taking care of the handicapped.

The Ambassador would like to express his sincerest gratitude to Dr. LAANE, Mr. KÕLLI and Ms. ARO, who so kindly spent as much as half a day, and to all the other who so warmly welcomed the Ambassador at the Health Center and the Care Center! 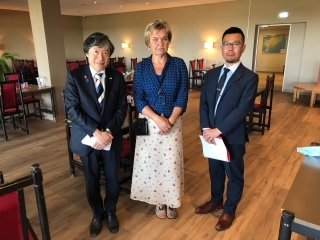