Ambassador KITAOKA had a meeting with Mr. KUNINGAS, Deputy Secretary General of the Ministry of Economic Affairs & Communications 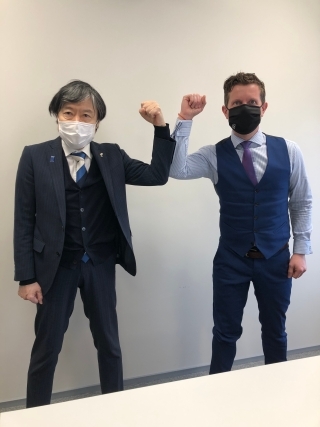 Meeting with Mr. Kuningas
On 3rd May, Ambassador KITAOKA visited the Estonian Ministry of Economic Affairs and Communications to have a meeting with Mr. Ahti KUNINGAS, Deputy Secretary General for Transport, on infrastructure projects.
Ambassador was escorted by Mr. Tomoya SHIGENARI, a Second Secretary in charge of economic affairs.

Now the project “Rail Baltica”, with the participation of Estonia, is under construction, aiming at connecting three Baltic countries and Poland with a railway.
There is also a future project to connect “Rail Baltica” with Finland through an underground tunnel.

This tunnel project was specified in the recent agreement to form the fresh coalition Government in January this year.
And MOU concerned was concluded between Estonia and Finland in April this year.

Mr. KUNINGAS gave a detailed briefing on the tunnel project to the Ambassador, including its schedule and its possible impact on the Estonian economy and society.
Ambassador said, “I have always paid a big attention to the “Rail Baltica” and the underground tunnel project, because they could exert a geopolitical influence over the 3 Baltic Countries and the Nordic Countries. They are also important because of their possible influence over the identity of the Estonians”.