The 1st of Most Advanced Komatsu-Bulldozer arrived in Estonia! It was named “Baruto” after Mr. Kaido Höövelson 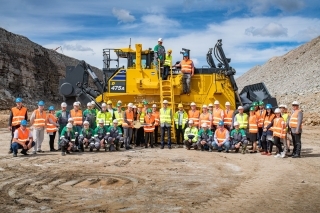 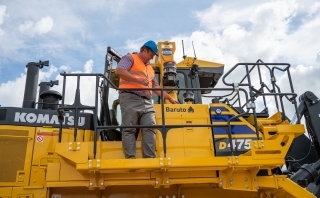 Bulldozer “Baruto”
The most modern bulldozer “D475A-8EO” is so proudly manufactured by Komatsu, a Japanese construction machine company.
And the world 1st delivery of this bulldozer was just made to Estonia!
On 15th July, under the beautiful weather, the hand-over ceremony took place led by Mr. Kaido Höövelson (known as “Baruto”), a member of the Parliament (Riigikogu) and a former Sumo wrestler, and the bulldozer was named “Baruto” after Mr. Höövelson.

This bulldozer is the most modern in its true meaning of the word.
While being the heaviest weighing 112 ton, it is equipped with the most modern information and communication technology, and clearing the EU Exhaust Gas Regulation “Stage V”.
The ceremony was held at the quarry in Narva-Jõesuu, located at the Eastern Estonia bordering Russia.
It is famous for its rich reserve of Oil Shale, and the delivered bulldozer is expected to make a significant contribution to the future of the Estonian economy.
Together with Mr. Höövelson, the ceremony was also attended by Mr. Masaki Kobayashi, CEO of TECNOSUMIT in charge of selling Komatsu machines, Mr. Gregory Peeters, Production Manager of Komatsu Europe, Mr. Andres Vainola, CEO of Enefit Kaevandused, Mr. Raine Pajo, Member of the Management of Eesti Energia AS, and Prof. Tiit Land, Rector of Tallinn University (taking the office of the Rector of Tallinn University of Technology soon).

Ambassador Kitaoka, in his congratulatory remarks, said “the Estonian GDP has become five times as big as 25 years ago. It has only become possible because of the tireless efforts of the Estonian workers devoted to the construction or mining. I feel very much pleased that Japan could make another contribution to the Estonian economy”.