KIMONO Exhibition was opened in a lively manner in Tallinn, the Capital City! 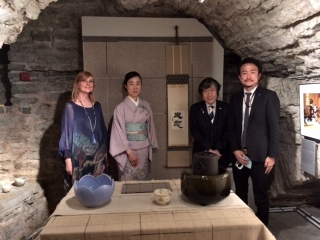 Tea service in a traditional manner

Speech by the Ambassador
On 10th June, the opening ceremony of the Exhibition “KIMONO-The Essence of Japanese Beauty” took place at the Adamson-Eric Museum located at the Old Town in Tallinn, the Capital City, displaying the beautiful KIMONO and OBI (sash for KIMONO) designed by Ms. Hisako TOKITOMO, a known designer, who has come all the way from Japan.
The ceremony was also attended by Ms. Eriko YUKI, the assistant to Ms. TOKITOMO, and Ms. Naomi TOSHISHIGE, tea ceremony master, who later served Japanese tea to the visitors in a traditional manner at the basement of the Museum.
From the Embassy of Japan, Ambassador KITAOKA attended to deliver a speech.
He was escorted by Mr. Toshifumi ITO, a Second Secretary in charge of culture and public relations and Ms. Made Leene TRUU.
The opening of the ceremony coincided with the fresh opening of the Museum after its renovation, and was attended by so many visitors, creating very much a lively atmosphere!
The ceremony started with the speech delivered by Ms. Sirje HELME, the Director-General of the Art Museum of Estonia.
It was followed by the Ambassador’s speech, where he said “KIMONO and OBI, designed by Ms. TOKITOMO, make us feel the beauty of nature, since they are dyed by the traditional Japanese method. The Japanese not only love nature but also even worship it as the place lived by the gods. Here is something in common with the Estonians, who feel something sacred in the nature, which must lead to the Estonian’s deep understanding of Ms. TOKITOMO’s works. I am very much convinced that the KIMONO Exhibition this time shall be another cultural bridge between Estonia and Japan”.
The KIMONO Exhibition has materialized with a devoted contribution by Ms. Taimi PAVES, who is a great friend of Japan, and the Secretary General of the Estonian-Japanese Friendship Association.
The Exhibition will be held from 10th June to 21st November in Adamson-Eric Museum.
Those who are interested in KIMONO and OBI are strongly recommended to visit it!

Together with Ms. TOKITOMO and YUKI 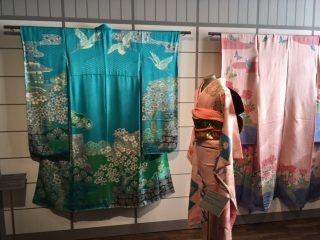