Ambassador KITAOKA had a meeting with Mr. KAEVATS, Adviser of the State Chancellery on national digitization 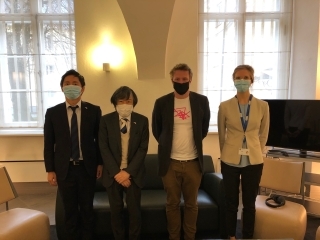 Stenbock House
On 20th November, Ambassador KITAOKA visited State Chancellery “Stenbock House”, located at the beautiful old town of Tallinn, the capital.
He was accompanied by Mr. Tomoya SHIGENARI, a Second Secretary in charge of economic affairs at the Japanese Embassy.
The purpose of the Ambassador’s visit is to have a meeting with Mr. Marten KAEVATS, Adviser of the Strategy Unit, and Ms. Agaate ANTSON, Business Diplomacy Digital Adviser of the Foreign Ministry.
In February this year, Mr. KAEVATS visited Japan as a member of the delegation of H. E. Mr. Jüri RATAS, Prime Minister.
Ambassador KITAOKA was very much impressed by the remarks made by Mr. KAEVATS at the meetings in Japan, and asked him for the appointment, which has materialized eventually!