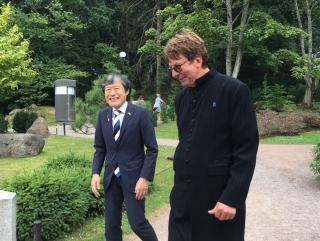 Together with Mr Ain Järve 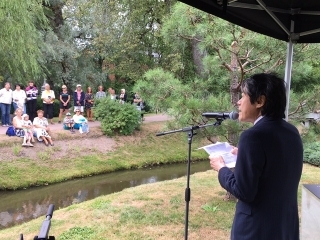 Speech by the Ambassador
On 30th July, the ceremony took place to celebrate the 10th Anniversary of the Japanese Garden in the Kadriorg Park, located in the suburbs of Tallinn, the Capital City.
With a kind invitation by Mr. Ain JÄRVE, the Director of the Kadriorg Park, Ambassador Hajime KITAOKA attended the ceremony to deliver a speech.
He was escorted by Ms. Yuki SAKAI, the Counsellor (Deputy Head of the Mission), Mr. Toshifumi ITO, a Second Secretary in charge of culture and public relations and Ms. Made Leene TRUU.
The ceremony was held in a tent, set up in an island of the Garden, and its opposite side across the pond.
Dr. Ene SELART, a known expert of Japan study in Estonia, also participated in all the way from Tartu.
The opening speech was delivered by Mr. JÄRVE, who introduced the history of the Garden.
He also expressed his gratitude to Mr. Masao SONE, the Representative of “Sone Gardening”, who designed the Garden, and to the Japanese Embassy for their supports.
The Ambassador’s speech followed, saying “it is indeed a great pleasure to cerebrate the 10th Anniversary of the Garden, coinciding with the 100th Anniversary of the friendship between Estonia and Japan. It was also wonderful that H.E. Mr. MOTEGI’s visit has materialized as the first Japanese Foreign Minister’s visit to Estonia, when the planting ceremony took place in this Garden jointly with the Estonian Foreign Minister LIIMETS on 1st July”.
The Ambassador also expressed his gratitude to Ms. Elle PENT, who is the author of the recently published book “the Japanese Garden in Kadriorg Park”, to Ms. Taimi PAVES, who supported this ceremony in such a devoted manner as usual, and to Ms. Riina MITT, Garden Specialist.
Then Mr. JÄRVE presented the Ambassador and others with Ms. PENT’s book, which was designed so beautifully in a Japanese manner.
And the concert was waiting!
A Japanese flutist, Ms. Mizuki SHINDO, so active in Estonia, and an Estonian taiko drummer, Ms. Hele-Riin UIB, collaborated in such a passionate manner, which charmed the audience!
It was followed by the plantation ceremony to commemorate Mr. Jüri TALLINN, who directed the film on the Kadriorg Japanese Garden, by Mr. JÄRVE and Mrs. TALLINN under the rainfall.
The Ambassador was interviewed by a TV channel and Ms. Thea KARIN, a journalist of Radio Kuku, which became her 2nd interview to the Ambassador following the 1st in May.
The end of the ceremony was a reception, where the participants enjoyed conversations over the Japanese cuisine under a tent.
The weather was a bit unfortunate, but the ceremony finished in very much a friendly manner with a photo session!
The Ambassador would like to express his sincerest gratitude to Mr. JÄRVE and all the others, who have supported the Japanese Garden in Kadriorg Park! 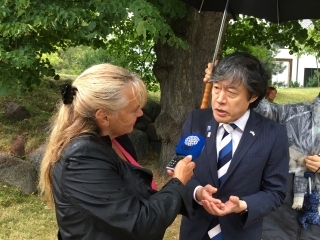 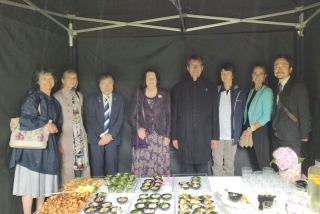