The demise of Lt. Gen. Johannes KERT, the former Commander of the Estonian Defense Forces Ambassador KITAOKA visited the Parliament (Riigikogu) to sign the condolence book 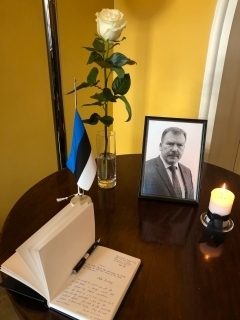 Condolences to the Lt. Gen. KERT 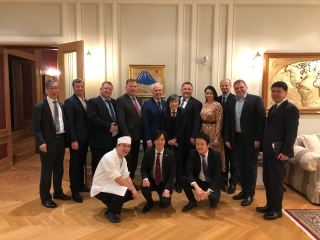 Dinner at the Ambassador’s Residence in January last year. Lt. Gen. KERT, 4th from left
On 4th March, Lt. Gen. Johannes KERT, who was the former Commander of the Estonian Defense Forces, and later elected as a Member of the Parliament, demised at the age of 61.
The Lt. Gen. was also a member of the Estonia-Japan Parliamentary Friendship Group, and he enjoyed Japanese cuisine at the Ambassador KITAOKA’s residence on 14th January last year together with his colleagues of the Friendship Group.

Facing the sudden news of his demise, in the afternoon of the 5th, Ambassador visited the Parliament (Riigikogu) to sign the condolence book, expressing his deepest condolences to the Lt. Gen. KERT, who made contributions not only to the defense of Estonia, but also to the Estonia-Japan friendship.