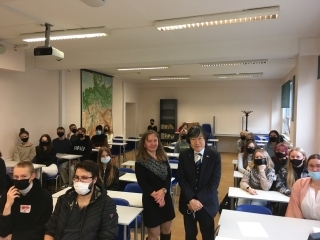 A photo session with the students and Ms. JUURIKAS 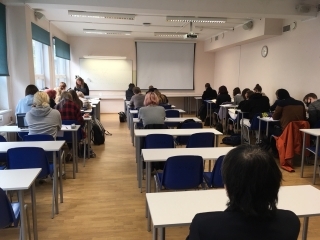 The pragmatic Japanese language class
On 11th October, Ambassador Hajime KITAOKA visited the Japanese language class of Tallinn University, lectured by Ms. Margit JUURIKAS.
Ms. JUURIKAS kindly attended the Ambassador’s Commendation Ceremony for Japanese Studies Program Unit in Tallinn University, which took place on 16th September at the Ambassador’s residence.
From the Japanese Embassy, Ms. Yuki SAKAI, the Counsellor (Deputy Head of the Mission), Mr. Toshifumi ITO, a Second Secretary, and Ms. Made Leene TRUU in charge of culture and public relations accompanied.
Ms. TRUU, who is supporting the various activities of the Embassy by using the best use of her very proficient Japanese, is a graduate of Tallinn University, who learned the Japanese language from Ms. JUURIKAS and other teachers as well.
She became so nostalgic, revisiting her alma mater.
The class on that day, which was attended by about 20 students, was meant for remembering the names of days in a week, together with learning how to explain what is happening on a particular day.
It started with bilateral exchanges between Ms. JUURIKAS and students one by one, followed by the group exercise by the students, two for each group, asking and responding mutually.
The Ambassador was impressed by the class, which is so pragmatic, and said “if I have learned the Estonian language in this way in the past two years, my Estonian could have been much better!” in such a regrettable manner.
His visit finished with a photo session with the students.
The Ambassador is afraid that his visit might have annoyed the students.
Still Ms. JUURIKAS was kind enough to accept him in such a cordial manner.
He would like to express his sincerest gratitude to her for giving him such a precious occasion!