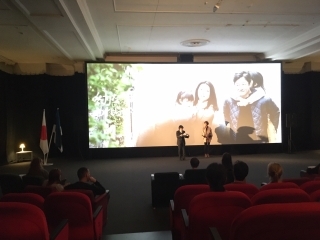 Opening speech by the ambassador 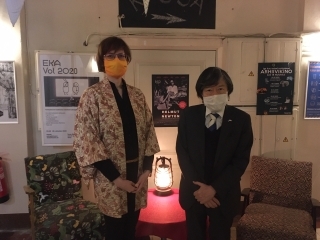 Together with Ms. JALLAI
On 28th October, Ambassador KITAOKA made his 8th visit to Tartu City to attend the fourth (last) night of “JAPAN Film Festival”, and delivered a speech.
This “Festival” was hosted by NPO “Japanese Culture Club Asashio” with the support of “JAPAN FOUNDATION”.
He was accompanied by Mr. Toshifumi ITO, a Second Secretary in charge of culture and public relations at the Japanese Embassy.

“Japanese Culture Club Asashio” is NPO, which was founded in 2005 by Ms. Kaia JALLAI, its President.
On 4th February this year at the Japanese Ambassador’s residence, “Asashio” was awarded “Certificate of Commendation” by the Japanese Foreign Minister (see our web and Facebook on that date for details).

This year, COVID-19 has created so many difficulties to hold this “Festival”.
The support of the Japanese Embassy was limited, and it was necessary to limit the number of the audience to the half of the full capacity of the venue “Tartu Electric Theatre”, asking them to make previous reservations.
But the President JALLAI-san has overcome all those difficulties, and succeeded in completing the four Japanese film showings altogether.

On the last night of the “Festival”, a Japanese film entitled “Dear Etranger”, directed by Ms. Yukiko MISHIMA, and awarded various prizes, was shown.
Prior to the showing, the Ambassador told the audience “this is a story of families. “Father in law” is translated into Japanese as “giri no chichi” or “father with obligation”. In this film, the relationship of Shin, the hero, and Kaoru, who is a daughter of Shin’s wife by her previous marriage is depicted. This is a relationship based on “giri” or “obligation”, because Shin is a “father with obligation”. In Japan, human feeling is called “ninjo”, which is as important as “giri”. Since both “giri” and “ninjo” are equally so much important in Japan, if those two contradict against each other, that creates tragedy. How Shin and Kaoru could overcome this tragedy? This style of tragedy could be found in many other countries. But tonight, I sincerely wish you could enjoy this film, telling you such a kind of tragedy in Japanese style”.

Finally, congratulations, President JALLAI-san, for the success of the “JAPAN Film Festival” under COVID-19!
And the sincerest gratitude to you for introducing Japan again in such a beautiful manner!