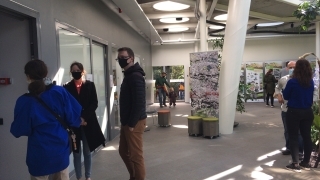 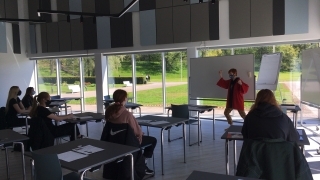 Manga workshop
On 29th May, the Embassy of Japan hosted “Japan Day” to introduce the Japanese culture at the Tallinn Botanic Garden.
This event is a part of the Garden’s project “Plant Kingdom 2021”, where each Embassy in Tallinn introduces its culture in turn on monthly basis, and Japan hosted “Japan Day” as the first host country.
This will be followed by the other participating countries, hosting the same event monthly.
In the Embassy of Japan, Mr. Toshifumi ITO, a Second Secretary in charge of culture and public relations, and Ms. Made Leene TRUU took charge of the event.
Ambassador KITAOKA participated in the afternoon session and delivered a speech.

The program comprises the screening of two films, “Every Day a Good Day” and “A Tale of Samurai Cooking”, a guided tour to the plants indigenous to Japan nurtured in the Garden, and workshops for Manga and Calligraphy (shodo).
Because of COVID19, participations in each event were requested to reserve their seats, so that enough space is secured among the participants.
Every event turned out to be fully-booked!
The guided tour was led by Mr. Urmas LAANSOO, Botanic Specialist, who guided the Ambassador on 12th May.
The tour was so popular that it was so much extended, enabling the participants to fully enjoy many plants indigenous to Japan, which were nurtured in the Garden so well taken care of.
Manga and Calligraphy workshops were each led by Ms. Galina ZAITSEVA, and Ms. Hetti MELTSAS, and every participant had a chance to learn the basics of Manga and Calligraphy in such an enthusiastic manner.
The participants’ works have become precious souvenir to be brought back home!
Before the screening of “A Tale of Samurai Cooking”, the Ambassador KITAOKA made a brief introduction of the film, which is full of entertainments with beautiful Kaga-cooking, Kimono, Swordsmanship, and political drama around Kaga-domain, and the participants fully enjoyed them.
With such a splendid weather, and with so many visitors in the Garden, the first event for the project “Plant Kingdom 2021”, “Japan Day” finished in very much a successful manner!
The Embassy of Japan would like to express its sincerest gratitude to everyone, who supported the hosting of the event, and to all the participants, who kindly spent their weekend to join us! 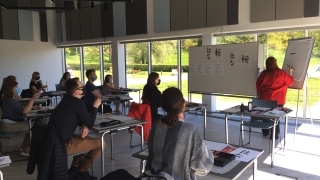 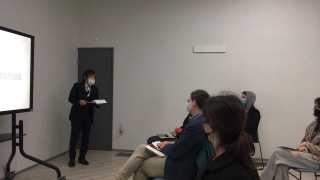 Brief introduction of the film by the Ambassador