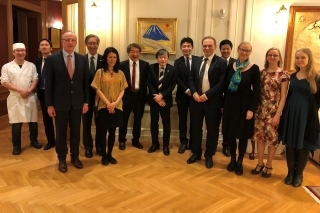 With the guests
On 9th March, the Japanese Embassy held a meeting at the Ambassador’s Residence to discuss how to strengthen the Estonian-Japanese relations in the academic research, inviting JSPS staff and other distinguished guests.

The participants enjoyed the Japanese dishes cooked by Mr. Takaaki Arai, the official chef of the Ambassador, and exchanged opinions on the academic exchanges between Estonia and Japan.

Ambassador said “it is a pity that the Science and Technology Agreement has not yet been signed between our two countries. Only the accumulation of actual exchanges makes the Agreement possible, so I would like to ask for your support”.