Ambassador KITAOKA was interviewed by Ms. Thea KARIN, a journalist of Radio Kuku, to introduce the beauty of Kimono and Japanese gardens 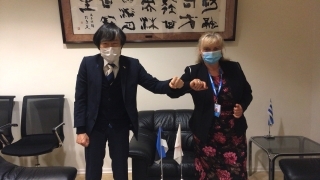 Together with Ms. Thea KARIN 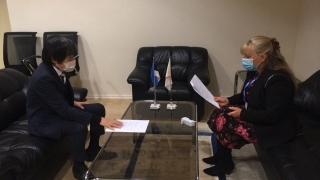 Interview by Radio Kuku
On 27th May, Ambassador KITAOKA was interviewed by Ms. Thea KARIN, a journalist of Radio Kuku with an experience of working for the Estonian Foreign Ministry, to introduce the beauty of Kimono and Japanese gardens.
The interview took place at the Ambassador’s room in the Japanese Embassy, and the Ambassador was accompanied by Mr. Toshifumi ITO, a Second Secretary in charge of culture and public relations.
The Ambassador emphasized that Kimono, though it has come to be worn on limited occasions, is still remaining to be an important part of the Japanese culture.
He also said that there is a growing fashion of wearing casual Kimono in a casual manner, and introduced an episode at the “Press Presentation of the coin & postage stamp for the Tokyo Olympics”, which took place one day before.
There, Ms. Triin HEIMANN, who designed the stamp inspired by Japan, appeared wearing casual Kimono, made in Estonia!
Concerning Japanese gardens, the Ambassador said, “they are distinguishing themselves as a miniature of the vast nature and even the universe, in such a confined space”.
This interview, led by Ms. KARIN’s dexterous way of questioning, has become so much wide-ranged, touching upon the significance of this year commemorating 100 years of the Estonian-Japanese friendship, similarities between the Estonians and the Japanese, characteristics of Japanese language pronunciation and so on, and it turned out to be very much enjoyable and fruitful occasion for the Ambassador!