Inaugural Greeting from the Ambassador MATSUMURA 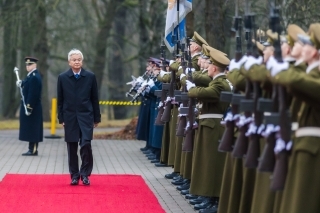 Salute by the honor guard 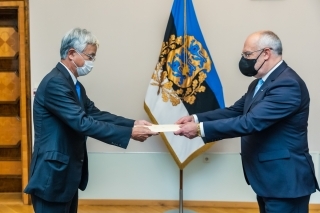 Presentation of the Letter of Credence
Let me introduce myself to all the readers of this web page.

I am very pleased to be appointed as an Ambassador in the memorable year of the 100th anniversary of friendship between Japan and Estonia.
Since I was appointed as an Ambassador after having worked for a private company for about 40 years, I might not look too confident about what my first time in this position will bring but I will put the experience I gained in the private sector to good use and work towards strengthening friendly relations between Japan and Estonia as well as promoting the appeal of both countries.

In mere 30 years after the restoration of independence in 1991, Estonia has established a solid position as one of the world's leading digital and cyber advanced nations and boasts a high level of education that supports this development. Estonia ranks third in the world in the EGDI (E-Government Development Index), which is an assessment of the digital progress of each country by the OECD, and is a top class country among the OECD members in the PISA, which measures the learning achievement of school children.
For the past year and a half, the world has been baffled by the COVID-19. The COVID-19 has forced people to make major changes in their lives and work styles, the importance of using IT has grown dramatically, and there is no doubt that the presence of Estonia, a country at the digital forefront, will become increasingly prominent.

This year was also the year of the Tokyo Olympics and Paralympics.
The Estonian team made remarkable achievements such as winning a gold medal in fencing but I was particularly impressed by an Estonian athlete Roman Fosti during the men's marathon which I happened to watch on TV.
The moment when a veteran athlete Fosti crossed the goal line despite nearing his exhaustion, under the harsh conditions of heat and humidity, which have caused withdrawal of about one third of more than 100 participating athletes, I felt that I saw a glimpse of Estonian tenacity and perseverance.

I hope to enjoy my life in Estonia while exploring the depths of this country with such a mysterious charm consisting of a refined cityscape nurtured by beautiful nature and long history, the world's most advanced digital technology and unicorn companies that are born one after another.

Last but not least, all the Embassy staff will make efforts for the Japanese residents to be able to live their daily lives with peace of mind. I am looking forward to working with you. 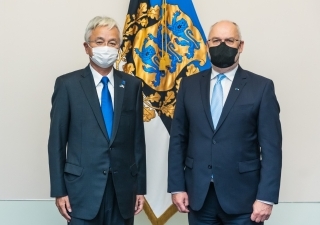 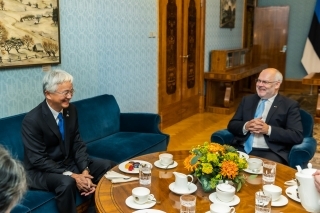 A meeting with the President Karis