Ambassador KITAOKA had a meeting with H.E. Mr. Toomas Hendrik ILVES, ex-President of the Republic of Estonia on the national digitization 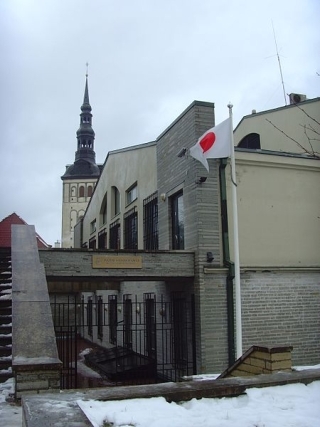 Embassy of Japan in Estonia
On 24th November, Ambassador KITAOKA had a meeting with H.E. Mr. Toomas Hendrik ILVES, the ex-President of the Republic of Estonia, who so kindly paid a visit to the Embassy of Japan, on the national digitization.
The meeting was also attended by Mr. Tomoya SHIGENARI, a Second Secretary in charge of economic affairs at the Japanese Embassy.

H.E. Mr. Toomas Hendrik ILVES worked as the President for 10 years since 2006, when he took a very strong leadership to construct the basis for the present Estonia, which is called “the most digitized country”.
During the meeting, Ambassador KITAOKA and Mr. SHIGENARI were very much privileged to listen to many precious episodes on the Estonian digitization.
At the age of 15, while studying at an American high school, H.E. Mr. ILVES was tasked to program a computer enabling it to calculate a square in an experimental class, and succeeded, which was such an exciting moment for him.
Per capita GDP of Estonia, which once exceeded that of Finland in 1938, plunged into one eighth of that of Finland in 1992, just after the recovery of independence from the Soviet Union’s domination, which made him determined to recover.
While listening to his episodes, the Ambassador started imaging vividly the road to digitization hit by Estonia.
The Ambassador also realized the importance of firm political will to make ID Card holding mandatory for all the nationals, which must be one of the lessons for Japan to make a success in her digitization in the future.

The meeting this time turned out to be one of the most impressive among so many meetings, which the Ambassador has made since he took his office last year.
The Ambassador would like to express his sincerest gratitude to H.E. Mr. ILVES for materializing this meeting in such difficult circumstances caused by COVID 19!