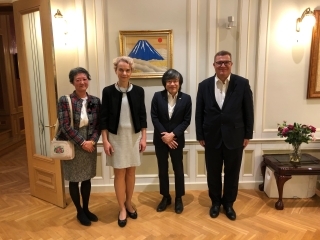 Together with the two guests 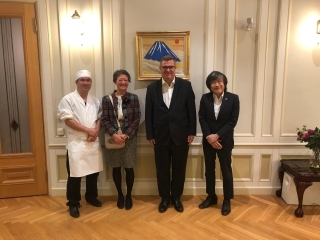 Together with Chef Arai
On 5th October, Ambassador Hajime KITAOKA invited Mr. Indrek KANNIK, the Director of ICDS (International Centre for Defence and Security), and Dr. Kristi RAIK, the Director of EFPI (Estonian Foreign Policy Institute) to the Ambassador’s residence to have a meeting.
From the Japanese Embassy, Ms. Yuki SAKAI, the Counsellor (Deputy Head of the Mission) attended.
Mr. KANNIK has taken his present post in November last year, after taking various important posts including the Minister of Defence.
With his rich experience in the field of national security, it is expected that ICDS could make further development in future.
For the Ambassador, this was the first time to meet Mr. KANNIK, which has made this meeting even more important.
And Dr. RAIK has published, lectured and commented extensively on the European foreign and security policy.
Hence, the Ambassador has already seen her on many occasions at seminars or lecture meetings.
The meeting started with the Ambassador’s power point presentation entitled, “Japan and the Emperor”.
A dinner followed in a dining room, fully ventilated, and each participant took a seat keeping distance with each other.
All the participants enjoyed conversations over the authentic Japanese cuisine, cooked by Mr. Takaaki ARAI, the official chef of the Ambassador, who recently received “2021 Foreign Minister’s Commendation as Excellent Executive Chef for Ambassador of Japan”.
The topics became so wide-ranged, from the Estonian domestic politics and diplomacy to the activities of ICDS.
It was also discussed how to further deepen the relationship between ICDS and Japan in future.
For the Ambassador, this meeting has turned to be very precious to personally listen to the opinions of the two most known Estonian experts of diplomacy and national security, Mr. KANNIK and Dr. RAIK!
The meeting finished with a photo session in such a friendly manner.
The Ambassador would like to express his sincerest gratitude to Mr. KANNIK and Dr. RAIK for accepting his invitation under COVID19!