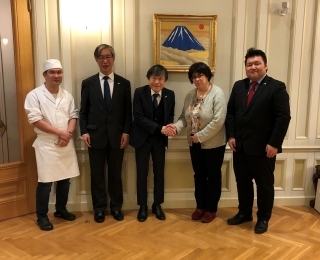 With the guests
On 2nd March, Ambassador Kitaoka invited Estonian and Japanese historians to his residence, and had a meeting with them over dinner. One is Ms. Ene Selart, who is conducting researches on the Japanese history at Tartu University in Estonia, and the other is Mr. Shingo Masunaga, who is conducting researches on the espionage history at Turku University in Finland. From the Japanese Embassy, Mr. Matsumura, the Counsellor and an expert of history of the Baltic countries and the Nordic countries.

Now, under the leadership of Ms. Selart, the project to publish a book on “the Estonian-Japanese History of Mutual Exchanges” is underway, supported by the Estonian Foreign Ministry. The project is also fully supported by the “National Institute of Defense Studies” of the Japanese Defense Ministry in the introduction of historical materials.

The participants, while enjoying Japanese dishes cooked by Mr. Takaaki Arai, the official chef of the Ambassador, discussed on the Estonian-Japanese History of Exchanges, dating back to as early as the 19th century, which has almost never been told, and the progress of the ongoing project.

The Ambassador said “in order to create a true friendship between Estonia and Japan, it is indispensable to understand their history of exchanges”, and wished wholeheartedly the completion of the project.