On 9th December, Ambassador Kitaoka invited the owner-chef of Japanese Restaurant “HAKU” in Tallinn, Mr. Shuichi   Shiraishi and his wife Marju to his residence. This invitation is to celebrate “HAKU” for its 4th award of “Silver Spoon Prize”, which is given to the best restaurants in that year.

The meeting was attended by Mr. Hiroyuki Hanami, Consul of the Japanese Embassy. While enjoying the Japanese dishes, cooked by Mr. Takaaki Arai, the official chef of the Ambassador, they have discussed the present situation on Japanese food in Estonia, and the possible way to promote it further. 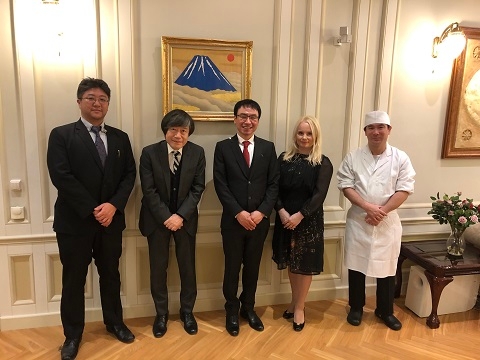 With the owner and chef of Restaurant HAKU