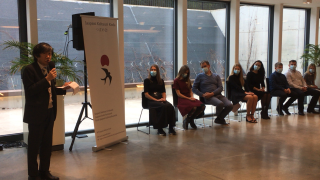 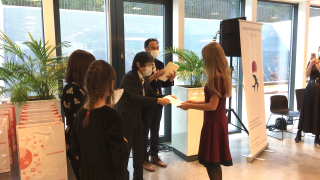 Awarding of the certificates and souvenirs
On 16th October, Ambassador KITAOKA visited “Estonian Film Museum” at Pirita, on the outskirts of Tallinn, the Capital City, to attend the award ceremony of “World Children’s Haiku Contest” as a guest.
He was accompanied by Mr. Toshifumi ITO, a Second Secretary in charge of culture and public relations at the Japanese Embassy.

This Contest is hosted by JAL Foundation with the support of the Japanese Foreign Ministry, and in Estonia, “Jaapani Kultuuri Koda (JKK)” worked as the Secretariat, in charge of accepting applications, judge, and award.
In the Contest this year, which marks the 16th, 7 Grand Prize winners and 27 Prize winners were selected in Estonia.
Those Grand Prize winners’ works are carried on JAL magazine distributed in their international flights.
The Japanese Embassy, upon the request of JKK, has held the awarding reception at the Ambassador’s residence.
This year, because of COVID-19, the ceremony took place at “Estonian Film Museum” with wider space.

The ceremony was chaired by Ms. Janne FUNK of JKK, and was opened by Ms. Elli FELDBERG, also working for JKK.
It was followed by the Ambassador’s guest speech, the review comments of a jury, Ms. Anna Kangro, reciting of the awarded “Haiku”s, and awarding of the certificates and souvenirs to an each winner.
It was eventually closed after a commemorative photo session.

It was such a pleasant surprise for the Ambassador to make a reunion with Ms. Funk in 24 years!
She escorted the Ambassador, who was the Deputy Head of the Japanese Embassy in Finland at that time, in Tallinn when the Ambassador made his first visit to Estonia.

The Ambassador said in his speech, referring to the work by Ms. Liisi Kõrvits, a Grand Prize Winner, “”Haiku”, however small, is still a “universe”. The awardees successfully discovered “universe” in many things like a swan or a dancer. I sincerely wish that they shall continue their discoveries of more wonderful “universe””.

The ceremony was followed by the film showing of “Pop in Q”, a Japanese animated film, joined by the other participants. We hope that these activities contributed to let Estonian people feel close to the traditional culture such as “Haiku” and pop culture in Japan! 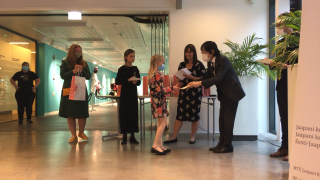 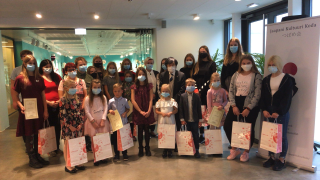 Together with the awardees