Ambassador Kitaoka made his first official visit to Haapsalu 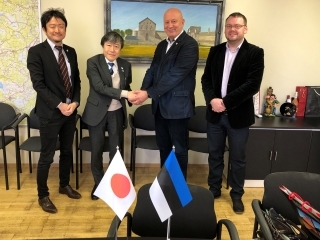 Together with the Mayor and Vice Mayor of Haapsalu

Castle Museum
On 3rd March, Ambassador Kitaoka made his first official visit to Haapsalu, which is one of the most famous Estonian resorts, and signed a memorandum with a Japanese city, Kaga of Ishikawa Prefecture in November last year. Ambassador was escorted by Mr. Ito, a Second Secretary in charge of culture and public relations.

The therapy using mud of Haapsalu has a history of 200 years, and the historical record says that it was used by Russian Emperor or Tchaikovsky, a composer. Haapsalu is also known by the Estonian film “The Fencer (Vehkleja)”, which is based on the true story of Endel Nelis. The film is one of the Ambassador’s most favorites, so he was looking forward to visiting Haapsalu so anxiously.

His visit started with the meeting with Mr. Urmas Sukles, Mayor of Haapsalu, and Mr. Tõnu Parbus, Vice Mayor. It was followed by the interview of the local newspaper “Lääne Elu”. Then Ambassador visited “Railway and Telecommunication Museum”.
He was briefed that the platform displayed in the Museum was actually used for the shooting of the last scene of the film “The Fencer”, which was so touching for Ambassador. He was also briefed that there was a railway connection between Haapsalu and Tallinn, the capital until 2005, and he said “I sincerely wish that the connection could be recovered in the near future”.

Thereafter, Ambassador visited “Castle Museum”, where he was welcomed by Mr. Kaire Tooming, Head of the Museum, and was guided inside of the Museum by Mr. Jaak Mäll, Head Curator, and learned the rich history of Haapsalu dating back to as early as 13th century.

Then Ambassador visited “Fra Mare”, where mud therapy is conducted, with the guidance of Ms. Maret Sukles, the wife of the Mayor. It was followed by Ambassador’s visit to “Haapsalu Lace Centre”, which is displaying the design of the lace, which was dedicated to the Japanese ex-Empress Michiko, when ex-President of Estonia, H.E. Mr. Toomas Hendrik Ilves made his visit to Japan. Ambassador was briefed that knitting is still taught at school in Haapsalu as a regular subject to maintain the tradition of lace making. He said “it is needless to say that maintaining tradition is important, but it is extremely difficult to maintain tradition actually”, and highly praised Haapsalu.

Ambassador’s visit finished with luncheon hosted by Mayor over delicacies coming from sea and land of Haapsalu. The luncheon was also attended by Vice Mayor, and Mr. Anton Pärn, Chief Executive Officer of the Foundation of Haapsalu and Läänemaa Museums.

Eventually Ambassador expressed his heartfelt gratitude to everyone, and left Haapsalu, promising his revisit! 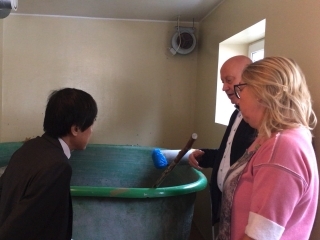 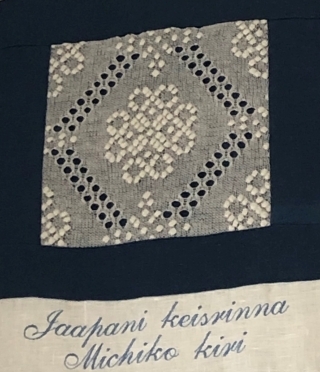 Design of the lace dedicated to the Japanese ex-Empress Michiko