Ambassador KITAOKA invited H.E. Mr. Väino REINART and his spouse to his residence 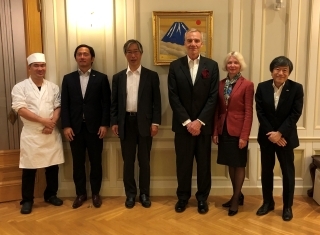 Ambassador REINART is one of the diplomats, to whom Ambassador KITAOKA pays his utmost respect in his diplomatic career of 40 years.
Ambassador REINART worked as Ambassador to the U.S.A., and in the Foreign Ministry headquarters in Tallinn, was in charge of trade and development cooperation.
His spouse, Kaire-san was once a diplomat in charge of publicity and culture in Tallinn, so we could truly say that H.E. Mr. and Mrs. REINART is the most powerful combination to promote the Estonian-Japanese friendship!
Ambassador KITAOKA already invited them to his residence separately, so the dinner this time, where both of them were invited together, has come to be very precious occasion for Ambassador KITAOKA.
From the Japanese Embassy, Mr. Hajime MATSUMURA, the Counsellor, and Mr. Tomoya SHIGENARI, a Second Secretary of the Japanese Embassy, in charge of economic affairs, also attended.

All the participants took their seats keeping enough distance from each other in the dining hall of the Ambassador’s residence, fully ventilated.
For this dinner, Mr. Takaaki ARAI, the official chef of the Ambassador, cooked the Estonian deer and fish in a Japanese style, and enjoying them, discussions were made on how to promote the bilateral friendship further in the future.

Ambassador KITAOKA praised the “Estonian Business Diplomacy Strategy for JAPAN 2020-2025” which was launched on 21st August wholeheartedly! (see our HP and FB on that date for details).
All the participants agreed to make the bilateral friendship, which has been surging now, sustainable and ever-lasting, by connecting it with solid bilateral business relationship.