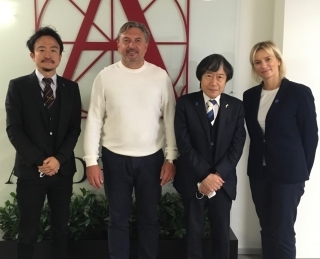 Together with Mr. TISHLER and Ms. INNO 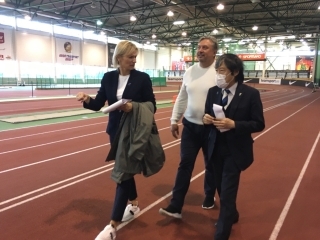 A guided tour in AUDENTES
On 25th August, Ambassador Hajime KITAOKA visited the headquarters of the Estonian Gymnastics Federation located in Tallinn, the Capital City.
He was escorted by Mr. Toshifumi ITO, a Second Secretary in charge of culture and public relations.

In the Federation’s office, located in a complex of a sports club “AUDENTES”, the Ambassador was welcomed by Mr. Peeter TISHLER, the President and Ms. Natalja INNO, the Secretary General to get a briefing on the Federation’s history.
The Estonian Gymnastics Federation cerebrated its 145 years anniversary last year, which means it has such a long tradition dating back to the era of the Russian Empire.
During the Soviet Union period, Estonian athletes were very active both as individuals and the group.
However, the Federation suffered from the drain of many trainers after the recovery of the independence in 1991.
It also suffered from the disposal of related facilities.
But now, overcoming those hardships, the Estonian gymnastics has been steadily developing, supported by the return of trainers back to Estonia, the improvement of facilities, and the promotion of popularity for gymnastics held by young Estonians.
Mr. TISHLER and Ms. INNO introduced an episode of Mr. Morinari WATANABE, the present President of the International Gymnastics Federation, who paid a visit to Estonia, which was the first as the Federation’s President, and gave various advices to the Estonian Gymnastics Federation.
Mr. TISHLER and Ms. INNO told the Ambassador that they are calling Mr. WATANABE as “Mori” in a friendly manner, which pleased the Ambassador a lot!
The briefing was followed by a guided tour into the complex of “AUDENTES”, which holds 1 thousand members and is utilized by 2 thousand youngsters.
The Ambassador saw many Estonians, taking their favorite exercises.
Finally, a health drink “Chaga Health” was presented to the Ambassador, and with a photo session, the visit finished in a friendly manner.
The Ambassador would like to express his sincerest gratitude to Mr. TISHLER and Ms. INNO for welcoming him in such a warm manner under COVID19!