Ambassador KITAOKA made his 9th official visit to Tartu, the center of the Southern Estonia (1st Instalment: Visit to the Estonian Genome Center of the Tartu University) 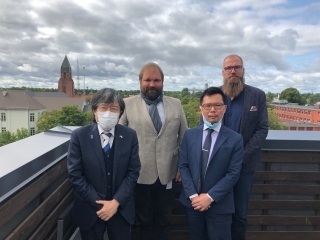 Together with Prof. Mait METSPALU and Prof. Tõnu ESKO

Together with Prof. Andres METSPALU
On 23rd August, Ambassador KITAOKA made his 9th official visit to Tartu, the center of the Southern Estonia.
He was escorted by Dr. Hiroshi TAKENAKA, Researcher of the Embassy and a medical doctor.

The Ambassador, who left Tallinn, the Capital City, early in the morning, arrived at his 1st destination, the Estonian Genome Center of the Tartu University.
He was welcomed by Prof. Andres METSPALU, Director of the Center, his son, Prof. Mait METSPALU, Director of the Institute of Genomics, which includes the Center, and Prof. Tõnu ESKO, teaching Human Genomics at the Institute.

The Japanese Embassy, actually, already visited this Center 6 years ago.
The purpose of the Ambassador’s visit this time is to learn the Center’s activities in more detailed manner with the accompaniment of Dr. TAKENAKA, a professional.
The visit started with the briefing given by Prof. Mait METSPALU and Prof. ESKO.
In the Genome Center, which was founded in 2001, genome data samples of 200,000 Estonians, which amounts to 20% of the total Estonian adult population, are stored.
By using those data, it becomes possible to specify the most effective medicine, medical treatment, and preventive medicine for a particular patient.
To materialize this, the Center is developing the system, where genome data could be linked with medical data, which could be introduced in two years.
Following the briefing, Prof. Andres METSPALU, who is the founder of the Center, conducted a guided tour for the Ambassador to the storage of the genome data located at the basement of the Center.
The Ambassador, so far in Estonia, has come across so many things, which are so “futuristic” with such excitements, and this visit gave the Ambassador another excitement to come across one more “futuristic” in the field of medical treatment!
The Ambassador would like to express his sincerest gratitude to Prof. Andres METSPALU, Prof. Mait METSPALU and Prof. Tõnu ESKO for welcoming the Ambassador in such a warm manner under the COVID19!