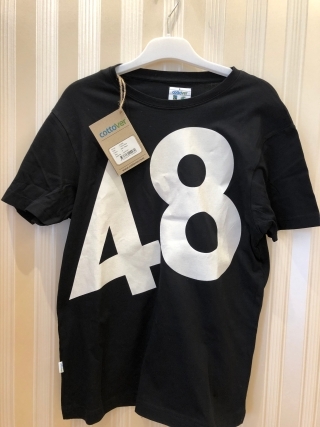 T-shirts with the logo of “Garage48”
On 29th April, Ambassador KITAOKA visited “Garage48”, an Estonian company, which has been hosting “hackathon”, an event to nurture entrepreneurship to create innovative products.
He was escorted by two Embassy staff, Mr. Tomoya SHIGENARI, a Second Secretary in charge of economic affairs and Mr. Hiroshi TAKENAKA, Researcher.

“Garage48”, which was founded in 2010 as a foundation and later was transformed into a company, is proud of hosting “hackathon” events globally for 230 times in 28 countries.
“Hackathon” is a word, coined by connecting “hack” and “marathon”.
“Garage48” version of “hackathon” is conducted by teams, each of which comprises 4 to 7 members.
They compete against each other for 48 hours from Friday evening to Sunday evening, to create their prototype.
The theme of “hackathon” is so wide-ranged, like medical treatment, education, cyber defense etc.
In March last year, when COVID19 spread, the theme chosen was “the solution of social problems caused by COVID19”.
The application to connect volunteers and people asking for help, was chosen as a winner.
It was Ambassador KITAOKA’s long time wish to visit “Garage48”, whose “hackathon” is indeed the national level approach taken by Estonia, the “futuristic country”, always seeking for innovations and materializing them.

Ambassador and his colleagues were briefed in a detailed manner on the history and the activities of “Garage48” by Ms. Mari HANIKAT, CEO, Ms. Kadri KÕIVIK, Head of Business Development and Ms. Tamara BEZLJUDOVA, Chief Marketing Manager.
Ambassador said, “one of the most serious problems Japan is facing now is its excessive bureaucracy in various organizations. To make them more flexible, “hackathon” approach is indispensable. I will do my best to introduce it to Japan”, and highly praised the activities of “Garage48”.
Ms. HANIKAT presented the Ambassador and his colleagues with T-shirts with the logo of her company, and the visit finished in a friendly manner with photo session.

Ambassador, hereby, would like to express his most sincere gratitude to “Garage48” for accepting him with his colleagues in such a difficult situation with COVID19!