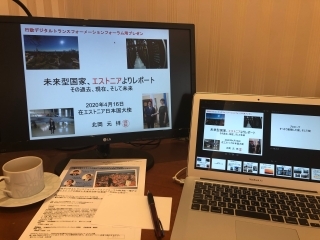 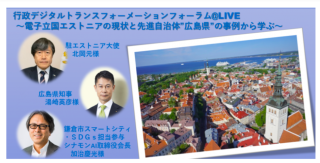 Overview of the Forum
On 16th April, Ambassador KITAOKA participated on live in “Administration Digital Transformation Forum”, connecting Tallinn and Tokyo by internet. The Forum was hosted by “GLOBIS AI Research Association”.
Ambassador, at the beginning of the Forum, made the special presentation entitled “Report from Estonia, Futuristic State. Her Past, Present, and Future” by using power point.

This forum was conducted by a web-conference system, which has gained in popularity under the on-going outbreak of COVID-19. All the participants shared cyber space by making individual accesses from their PCs to internet. It has made Ambassador’s live participation from Estonia possible.

Mr. Hidehiko YUZAKI, the Governor of Hiroshima Prefecture, was originally scheduled to participate in, but could not make it because of the “Declaration of Emergency Situation” all over Japan on that day.
The number of the participants amounted to about 120. Following the Ambassador’s presentation, Mr. Yoshimitsu KAJI made a presentation to introduce the strategy of the Kamakura City. Mr. KAJI is an Adviser to Kamakura City on “Smart City”, and SDGs.

Then a panel discussion and a question/answer session followed, chaired by Mr. Mitsuhiro ARASE, the Representative Director of “DIGITAL Transformation Lab.”. In this Forum, whose aim is to think about the future of the Japanese administration referring to the example of Estonia, there were enthusiastic interactions among the participants, which turned out to be informative and stimulating time for the Ambassador.
Many thanks from the Ambassador to Mr. ARASE for so kindly giving such a precious occasion!