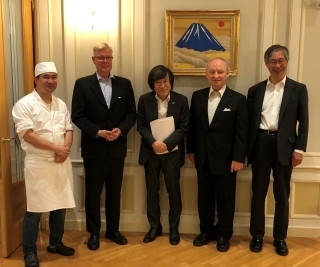 H.E. Mr. TASA worked in Tokyo between 2010 and 2014.
During his tenure, the visit by the Estonian President at that time, H.E. Mr. Toomas Hendrik ILVES to Japan materialized.

From the Embassy, Mr. MATSUMURA, the Counsellor, who has devoted himself to the Japanese diplomacy with Nordic and Baltic countries both abroad and Japan, and has already got acquaintance with those two guests, attended.

All the participants took their seats keeping enough distance from each other in the dining hall of the Ambassador’s residence, fully ventilated.
While enjoying Japanese cuisine, cooked by Mr. ARAI Takaaki, the official chef of the Ambassador, the participants discussed on how to promote the Estonian Japanese friendship further.
For the Ambassador KITAOKA, the dinner this time has come to be a very precious occasion to get many advices from those two veteran diplomats, who have deep knowledge both on Estonia and Japan.