Ambassador KITAOKA paid a courtesy call to H.E. Mr. Raul SIEM, the Minister of Foreign Trade and IT 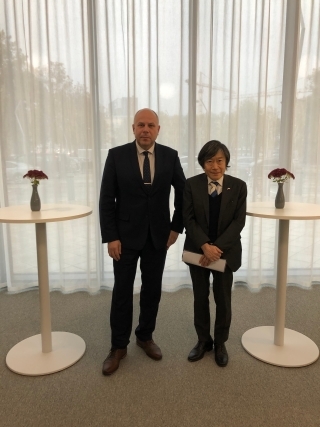 Together with the Minister of Foreign Trade and IT Together with attendees
On 27th October, Ambassador KITAOKA paid a courtesy call to H.E. Mr. Raul SIEM, the honorable Minister of Foreign Trade and Information Technology.
Mr. Tomoya SHIGENARI, a Second Secretary of the Japanese Embassy, in charge of economic affairs, accompanied.

The Minister praised the Estonian-Japanese bilateral relationship, based on friendship and cooperation, with which the Ambassador fully agreed!
It was followed the briefing by Mr. ÕNNIK on the Estonian AI strategy.
The Ambassador was impressed by such a dynamic strategy, extending the most advanced AI technology from the Estonian public sector to its private sector, and further to Europe and international organizations.
The Minister and the Ambassador further discussed on the possibility of Estonian contribution to the Tokyo Olympic Games and the Osaka Exposition.
It was also discussed to substitute the mutual human visits, which have been suspended by COVID-19, with on-line meetings or conferences.

The meeting finished in a friendly manner with the exchange of presents, which are the Japanese Government’s present of “Kiyomizu-yaki” pottery, and the Minister’s present of CD with masterpieces of Arvo PÄRT, a famous Estonian composer.