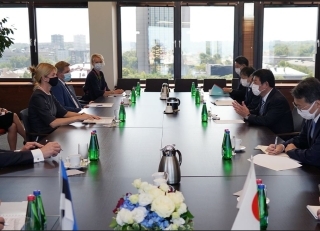 Japan-Estonia Foreign Ministers’ Meeting
On July 1, commencing at 11:40 a.m. local time (same day, 5:40 p.m. JST) for 2 hours and 10 minutes, Mr. MOTEGI Toshimitsu, Minister for Foreign Affairs of Japan, who is visiting Estonia, held a foreign ministers’ meeting with H.E. Ms. Eva-Maria Liimets, Minister of Foreign Affairs of the Republic of Estonia. The overview of the meeting is as follows.

1. At the outset, Minister Motegi stated that he is delighted to be the first Japanese foreign minister to visit Estonia on the milestone 100th anniversary of friendship between Japan and Estonia. Minister Motegi stated that Estonia is a partner sharing fundamental values, and that Japan attaches importance to working with Estonia that serves as a non-permanent member of the United Nations Security Council (UNSC) this year. In response, Minister Liimets welcomed Minister Motegi’s visitas the first Japanese foreign minister, and expressed her intention to further deepen the friendly relations between the two countries on the occasion of the 100th anniversary of their friendship.

2. The Ministers valued the progress made in bilateral cooperation in digital cyber, a field in which Estonia has strengths, and confirmed to further enhance their cooperative relationship in a wide range of areas, including politics, economy, and culture, in the wake of Minister Motegi’s visit and this year’s 100th anniversary of their friendship.

3. Minister Motegi expressed the view that Japanese companies with advanced technological capabilities can contribute to region-wideinfrastructure projects in the Baltic States, including Estonia, such as the project for synchronization with the continental European network. The Ministers shared the view to promote such cooperation that contributes to strengthening European integration. In addition, Minister Motegi requested Estonia’s cooperation on lifting the EU’s import restrictions on Japanese food products.

5. Regarding the situation in East Asia, the Ministers shared serious concerns about the persistent and strengthened unilateral attempts to change the status quo by force in the East and South China Seas, including the Coast Guard Law, as well as about the situations surrounding Hong Kong and the Xinjiang Uyghur Autonomous Region. The Ministers shared the view on the importance of maintaining and strengthening a rules-based free and open international order through unity of like-minded countries that share fundamental values. The Ministers confirmed the full implementation of UNSC resolutions toward the complete, verifiable, and irreversible dismantlement of all of North Korea’s weapons of mass destruction and ballistic missiles. Minister Motegi asked for understanding and cooperation toward the immediate resolution of the abductions issue and obtained Minister Liimets’ support. Furthermore, the Ministers exchanged views regarding regional affairs, including Russia, Ukraine, Belarus, and Afghanistan. The Ministers shared the view to promote Japan-NATO cooperation through the NATO Cooperative Cyber Defence Centre of Excellence located in Estonia to which Japan has sent an expert.

6. Minister Liimets expressed her support for holding the Tokyo Olympic and Paralympic Games and her expectations toward Estonia’s high-level visits to Japan on the occasion of the Games and Minister Motegi welcomed such expectations.