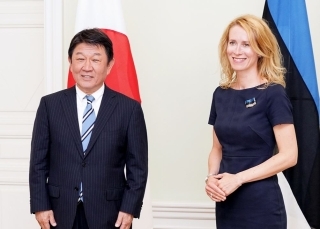 Courtesy Call on Prime Minister KALLAS of Estonia by Foreign Minister MOTEGI
On July 1, commencing at 11:40 a.m. local time (same day, 5:40 p.m. JST) for 2 hours and 10 minutes, Mr. MOTEGI Toshimitsu, Minister for Foreign Affairs of Japan, who is visiting Estonia, held a foreign ministers’ meeting with H.E. Ms. Eva-Maria Liimets, Minister of Foreign Affairs of the Republic of Estonia. The overview of the meeting is as follows.

On July 1, commencing at 3:10 p.m. local time (9:10 p.m. JST) for 40 minutes, Mr. MOTEGI Toshimitsu, Minister for Foreign Affairs of Japan, who was visiting Estonia, paid a courtesy call on H.E. Ms. Kaja Kallas, Prime Minister of the Republic of Estonia. The overview is as follows.

1. At the outset, Minister Motegi stated that he is delighted to be the first Japanese foreign minister to visit Estonia on the milestone 100th anniversary of friendship between Japan and Estonia. Minister Motegi stated that Japan attaches importance to working with Estonia as a partner sharing fundamental values. In response, Prime Minister Kallas welcomed Minister Motegi’s visit as the first Japanese foreign minister to Estonia, and expressed her intention to deepen their bilateral relations in various areas including digitalization and cybersecurity. .

2. Minister Motegi expressed the view that Japanese companies with advanced technological capabilities can contribute to region-wide infrastructure projects in the Baltic States, including Estonia, such as the project for synchronization with the continental European network. The two sides confirmed to promote such cooperation that contributes to strengthening European integration.

3. The two sides also shared the view on the importance of maintaining and strengthening a rules-based free and open international order through unity of like-minded countries that share fundamental values toward the realization of “the Free and Open Indo-Pacific.” In addition, Prime Minister Kallas expressed strong solidality with Japan regarding North Korea’s abductions issues.