2019/12/23
On 16th December, Ambassador Kitaoka paid a courtesy call to H.E. Mr. Kaimar Karu, the Minister of Foreign Trade & IT of the Republic of Estonia.
The meeting was also attended by Mr. Viljar Lubi, Deputy Secretary General for Economic Development, and Mr. Shigenari, Second Secretary in charge of the Economic Affairs of the Japanese Embassy.
Both Minister and Ambassador confirmed that Estonia and Japan are enjoying friendship now.
They further discussed what is to be done to make this relationship more stable and long lasting.
Minister introduced some Estonian technologies etc., which could be useful for the future of Japan.
The meeting turned out to be so useful for Ambassador, and he expressed his sincere gratitude to Minister. 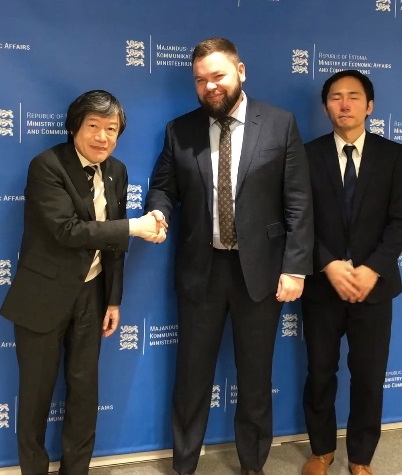 With the Minister of Foreign Trade & IT