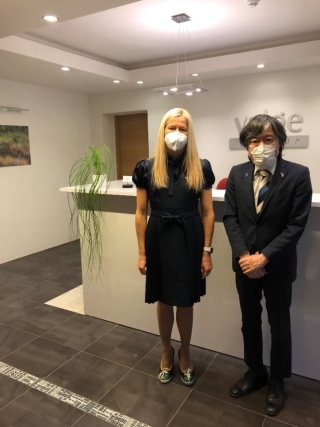 Welcome by Ms. MULENOK, the SG of NATO Association 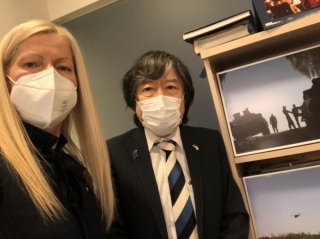 Briefing about the activities of the Association
On 5th October, Ambassador Hajime KITAOKA visited “Estonian NATO Association”, which was founded to promote the understanding on NATO of the Estonian nationals.
The Ambassador, on his arrival at the Headquarters of the Association located in Tallinn, the Capital City, was welcomed by Ms. Krista MULENOK, the Secretary General of the Association.
Her briefing followed at the conference room of the Headquarters.
She is a veteran, working as the Secretary General for the past 8 years, and is also taking the important post of the Vice President of “Atlantic Treaty Association (ATA)”.
This “Estonian NATO Association” was established by national leaders including Toomas Hendrik Ilves, the ex-President of Estonia, in order to deepen the understanding on NATO of the Estonian nationals including the Russian speaking people in 2001, preceding 2004, when Estonia has gained her NATO membership, which she had sought for so anxiously.
Therefore, this year marks the 20th Anniversary of the Association.
Bordering Russia has made Estonia the forefront of NATO’s European Defense.
Looking back its history, Estonia suffered a series of subordinations to big powers for 700 years since 13th century.
After fighting the severe Independence War and attaining its independence eventually in 1920, it was occupied by the Soviet Union in 1940, and it has recovered the independence in 1991.
For such a country of Estonia, its national security is nothing but a challenge of the utmost importance.
The Association, cooperating with volunteers, has been continuously launching various projects, teaching the young Estonians on the importance of national security.
Ms. MULENOK presented the Ambassador with a card game “NATONIA”.
This game, crafted by an Estonian student, was the winner of the game competition conducted in 2014, and is devised to be able to learn the importance of NATO while just playing it.
The national security could never be secured by just leaving it to the political leaders or the military.
It could only be secured, firmly supported by deep understanding of the nationals in general.
This visit turned out to be a very precious occasion for the Ambassador to reconfirm such a basic point!
Ambassador would like to express his deepest gratitude to Ms. MULENOK for accepting him in such a cordial manner under COVID19! 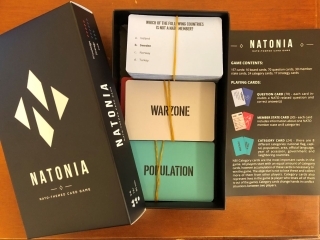 "NATONIA", a card game devised to learn the importance of NATO while playing