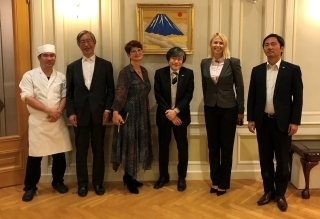 From the “Confederation”, Ms. Kristi Sõber, the Foreign Relations Manager attended.
From the Japanese Embassy, Mr. Hajime MATSUMURA, the Counsellor, and Mr. Tomoya SHIGENARI, a Second Secretary in charge of economic affairs attended.

The meeting started with the Ambassador’s power point presentation, entitled “What is Japan? Island Country, so mysterious”.
Then Ambassador expressed his sincere gratitude to “Confederation” for its warm welcome given to the “Keidanren” mission, which visited Estonia in November last year.
He also thanked the organization of Estonian business delegation, which accompanied H.E. Mr. Jüri RATAS, the Prime Minister, when he made the official visit to Japan in February this year.
It was followed by the authentic Japanese dinner, cooked by Mr. Takaaki ARAI, the official chef of the Ambassador, and all the participants exchanged their views extensively on the Estonian employment situation, the influence caused by COVID 19, and the challenges caused by the decline of population, which is shared by Japan.

The Estonian-Japanese friendship has been surging like “honeymoon”.
To turn it to the sustainable and long-lasting relationship, the strengthening of the bilateral business relationship is indispensable, where lies the importance of “Estonian Employers’ Confederation”.
For the Ambassador, this dinner has come to be very precious occasion to make his relationship with “Confederation” even closer.