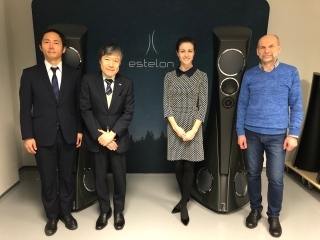 With Mr. Alfred Vassilkov, the Founder, and Ms. Alissa Vassilkova, the Co-Founder and CEO of “estelon” 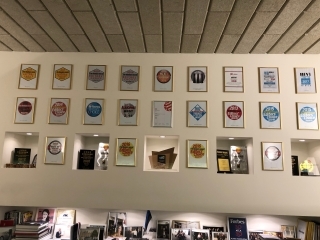 “estelon” speakers have been awarded many times
On 27th February, Ambassador Kitaoka visited “estelon”, which manufactures the world highest class speakers. He was escorted by Mr. Shigenari, a Second Secretary in charge of economic affairs in the Japanese Embassy. The “estelon” speakers are exported to over 30 countries including Japan, and awarded many times in many countries.

The Ambassador was welcomed by Mr. Alfred Vassilkov, the Founder, and Ms. Alissa Vassilkova, the Co-Founder and CEO of “estelon”. The Ambassador’s visit started with briefing on the history of “estelon”, whose origin dates back to the Soviet period. It was followed by the actual listening of the speakers, which “estelon” is so much proud of. To the Ambassador’s surprise, the existence of the speakers cannot be felt at all! Instead, the actual orchestra is felt with classical music, and the actual jazz band is felt with jazz, in such a realistic manner.

Indeed, their speakers are nothing but masterpieces, which could be created only by the exquisite delicacy of the Estonians. They reminded Ambassador of the piano created by “Estonia Piano Factory” (see our Facebook article uploaded on 2nd December last year).

Ambassador said “I would like to make my utmost efforts to promote export of “estelon” speakers to the Japanese market”.