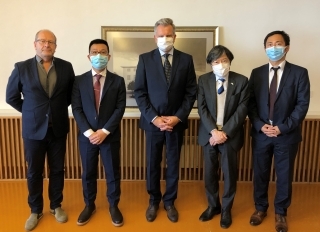 Logo of “E-Piim”
On 24th September, Ambassador Kitaoka visited Põltsamaa, a town located at 130 km south of Tallinn, the Capital City.
The purpose of his visit is to inspect the factory of “E-Piim Tootmine (E-Milk Production)”, which is the biggest dairy production cooperative in Estonia.
The Ambassador was escorted by two Embassy staff, Mr.Tomoya SHIGENARI, a Second Secretary in charge of economic affairs and Mr. Hiroshi TAKENAKA, Researcher.

The Ambassador was welcomed by Mr. Jaanus MURAKAS, the Chairman of the Board, and Mr. Margus LEEK, the CEO, and was briefed on the present situation of milk production in Estonia, together with the history and the present situation of “E-Piim”.
“E-Piim” has signed a contract with “Marubeni”, one of the biggest trading companies in Japan, five years ago to export its cheese, which is now sold by “AEON”, a leading distributor in Japan.
“E-Piim” cheese, whose taste is so much suitable for the Japanese, is a favorite of the Ambassador, and its export to Japan has increased by six times in the past six years!
Now the project to construct a new factory is on-going.
For the Ambassador, to whom H.E. Mrs. Kersti KALJULAID, the President, expressed her wish to promote the export of the Estonian dairy products, it was wonderful news to hear that the export of “E-Piim” cheese has risen in such a rapid manner!

The briefing was followed by a tour to the factory.
Due to COVID 19, the tour is limited within the packaging area.
The Ambassador inspected the packaging of fresh cheese, going on in such a steady manner, with Japanese machine.