Ambassador KITAOKA had a meeting with Eesti Energia 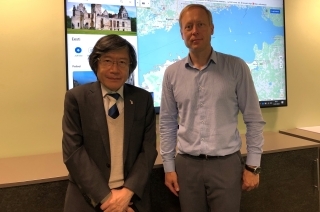 Together with Mr. Pajo, board member of Eesti Energia 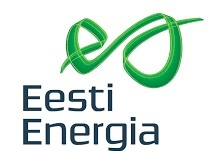 Logo of Eesti Energia
On 15th July, Ambassador Kitaoka made his first official visit to Narva-Jõesuu, located at the Eastern Estonia bordering Russia, accompanied by Mr. Tomoya Shigenari, a Second Secretary of the Japanese Embassy.

After participating in the hand-over ceremony of Komatsu-bulldozer, Ambassador inspected an electric power station and an oil refinery of Eesti Energia, guided by its Board member, Mr. Raine Pajo.
Thereafter, the meeting between Mr. Pajo and Ambassador took place at the Narva Jõesuu office of Eesti Energia.

The meeting started with Ambassador’s briefing on the energy-mix of Japan before and after the Tsunami disaster in 2011, which gave the devastating damage to the Japanese atomic power generation.
It was followed by Mr. Pajo’s briefing on the Estonian energy strategy, which has been addressing aggressively to the reduction of CO2 emission, by introducing renewable energy, and by replacing oil shale with oil extracted from shale, which emits less CO2, which was impressive for the Ambassador.

Mr. Pajo, who had an experience of visiting Japan in 2012 to inspect Japan after Tsunami disaster, and Ambassador agreed to continue dialogues on energy policy further, promising to see each other again in Tallinn, the capital city.