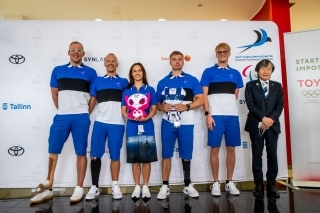 Together with the Estonian Paralympics Team 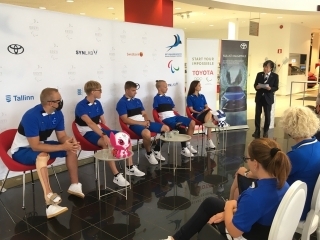 Speech by the Ambassador
On 17th August, Ambassador Hajime KITAOKA attended the “Encouragement Ceremony for the Estonian Team for the Tokyo Paralympics” hosted by the Estonian Paralympic Committee to deliver a speech to encourage all the 5 members of the Estonian Team.
The Team comprises 4 for swimming (Ms. Susannah KAUL, Mr. Matz TOPKIN, Mr. Robin LIKSOR, Mr. Kardo PLOOMIPUU) and 1 for discus throw (Mr. Egert JÕESAAR).
Mr. Toshifumi ITO, a Second Secretary in charge of culture and public relations, and Ms. Made Leene TRUU escorted the Ambassador.

The Ceremony took place at the showroom of Toyota Baltic AS, located in Tallinn, the Capital City, and it was opened by Ms. Monika HAUKANÕMM, President of the Estonian Paralympic Committee.
It was followed by the speech of the Ambassador, who said “it is indeed a big challenge for Japan to host the Olympics and Paralympics amid COVID-19. Japan eventually overcame this challenge, and managed to host the Olympics, simply because of the unity of the participating countries. The most impressive unity was shown by Estonia, whose President KALJULAID so kindly attended the closing ceremony of the Olympics as the only head of the state. And this Estonian unity was so well rewarded by one gold medal and one bronze medal, which should be called a remarkable success considering such a small population of Estonia!”.
He also said “now it is your turn! I would like to expect a lot from the performance of all of you at the Paralympics, which is as important as the Olympics. During one year and 11 months, while I worked as the Ambassador in Estonia, I have already become half-Estonian. Therefore, here in Estonia, together with all of my Estonian friends, I am determined to cheer all of you, the members of the Estonian Paralympics Team!”.
Then the Ambassador cheered all the Team members one by one, by putting a pin badge to commemorate 100 years of friendship between Estonia and Japan on a collar of their uniform.
It was followed by a speech by Mr. Marek MAIDE, General Marketing Manager of Toyota Baltic, a question and answer session between the Team and Ms. Gertrud ALATARE, Head of the Communication of the Estonian Paralympic Committee, and a photo session.
Eventually “sushi”, the handmade of Ms. Maria LILJE, an Estonian entrepreneur, who once studied in Japan and now is running a Japanese restaurant.
The ceremony finished in such a friendly manner.

The Ambassador and all the staff of the Japanese Embassy, from the bottom of their heart, wish for the best of luck to all the athletes of the Estonian Team for the Tokyo Paralympics! 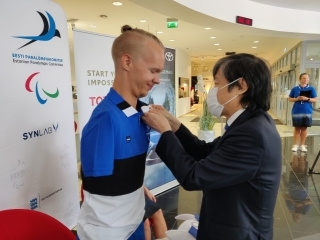 Presentation of the pin badge to commemorate 100 years of friendship An athlete with mascot