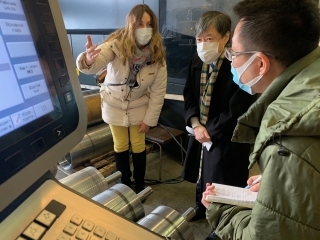 Inspection of the manufacturing process 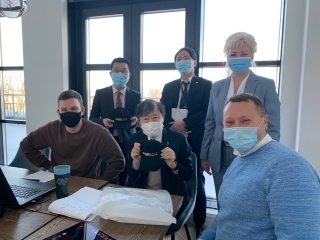 Briefing at the office
On 10th February, Ambassador KITAOKA, visited “Dynomax”, an Estonian high technology company, which is located in the suburbs of Tallinn, the capital city.
The Ambassador was escorted by two Embassy staff, Mr.Tomoya SHIGENARI, a Second Secretary in charge of economic affairs and Mr. Hiroshi TAKENAKA, Researcher.
Like so many visits in the past, this visit also materialized thanks to such a kind invitation to Ambassador by Ms. Helen UUS, the Chairperson of Estonian NPO “MTÜ Diplomatic Relations Project”.
“Dynomax” is manufacturing Chassis dynamometer, which measures the power and the fuel efficiency of automobiles.
What is distinctive about “Dynomax” product is its price, which is almost half of its competitors, and its measured data, which is transmitted wirelessly to PC, pad, or even to smartphone.
Traditional setting of connecting cables is no more necessary.
Ambassador was very much pleased to come across another product, which is full of efficiency and digital equipment, making “Dynomax”’s machine look really Estonian!
For the Ambassador, it  was also pleasant to hear that a machine tool of a Japanese company “DGM Mori”is used for their production process.
Ambassador’s visit started with the inspection of the manufacturing process at their factory, which was followed by the briefing at their office.
Mr. Maksim ZOLOTARJOV, the founder and CEO, is not only an excellent engineer but also a known racing driver holding some records in the past.
The beautiful combination of his two different careers has come up with such an innovative product!
Ms. Linda ANSTAL, the Director of Sales, is Mr. ZOLOTARJOV’s wife, and gave the Ambassador detailed briefings on her husband’s company with such a fluent English.
Their product has been exported to Europe, the U.S.A., and Asia, but its export to Japan is yet to come.
Ambassador said “your product has a potential to be exported to Japan”, and he promised to share some related information with “Dynomax”, wishing for their success in Japanese market in future.

Finally, Ambassador would like to reiterate his sincerest gratitude to Ms. Helen UUS for her fruitful arrangements to promote the bilateral friendship between Estonia and Japan! 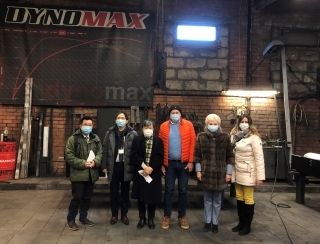