Ambassador KITAOKA had a meeting with Dr. LAANE, Head Doctor of Kuressaare Hospital, Ms. ARO, a member of the Parliament, and Ms. SÄRGLEP, a board member of Estonian Parents’ Association 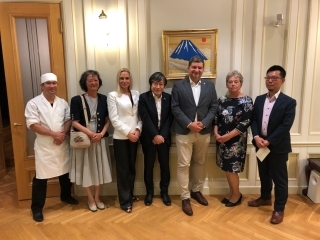 Together with the participants
On 19th August, Ambassador KITAOKA invited to his residence,
Dr. Edward LAANE, Head Doctor of Kuressaare Hospital, the central hospital of Saaremaa Island, Ms. Tiiu ARO, a member of the Parliament (Riigikogu), and Ms.Annely SÄRGLEP, a board member of Estonian Parents’ Association.
From the Embassy, Ms. Yuki SAKAI, the Counsellor (Deputy Head of the Mission) and Mr. Hiroshi TAKENAKA, Researcher and a medical doctor accompanied.

It started with the Ambassador’s power point presentation entitled, “What is Japan? Mysterious Island Country”.
Dinner followed in a dining room, fully ventilated, and each participant took a seat keeping distance with each other.
Dr. LAANE is a known pro-Japanese with experience of visiting Japan many times, and also a regular visitor of the Embassy’s Facebook.
He has a deep insight into not only the medical system of Estonia, but also of Japan, and one of the Estonians whom the Ambassador pay his utmost respect to.
Ms. ARO has played important roles as the Minister for Social Affairs, the Chairperson of the Municipality Council of Saaremaa etc., and now is so active as a member of the Parliament (Riigikogu), belonging to the Reform Party, a ruling party, by making the best use of her rich experience.
And Ms. SÄRGLEP has a rich experience as a board member of Estonian Parents’ Association, which is in charge of the parents-children relationship, the core of the Estonian families.
All the participants enjoyed conversations over the authentic Japanese cuisine, cooked by Mr. Takaaki ARAI, the official chef of the Ambassador.
The dinner this time turned out to be a very precious occasion for the Ambassador to learn the situation on COVID19 in Estonia, the politics in Saaremaa, and the parents-children relationship in Estonian families now.
The Ambassador would like to express his sincerest gratitude to all the participants for kindly accepting his invitation!