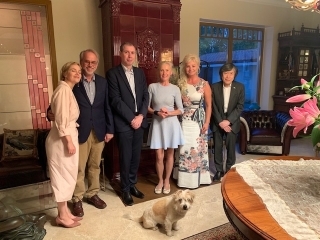 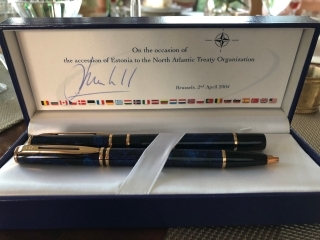 The pen actually used for signing for accession to NATO
On 21st July, Ambassador Kitaoka was invited by former Foreign Minister, H.E. Ms. Kristiina Ojuland to her house, together with the honorable dean of the diplomatic corps, H.E.Mr. Roberto Colin, the Brazilian Ambassador and his wife, Svetlana, and H.E. Mr.Archil Karaulashvili, the Georgian Ambassador.

The arrangement this time was again made by Ms.Helen Uus, the Chairperson of Estonian NPO “MTÜ Diplomatic Relations Project”, who has made many kind and generous arrangements for Ambassador Kitaoka in the past.

The invitees enjoyed conversations at the beautiful mansion facing the sea in the suburbs of Tallinn, the capital city, together with exquisite cuisine cooked by H.E. Ms. Ojuland by herself.
H.E. Ms. Ojuland led the Estonian diplomacy as the Foreign Minister between 2002 and 2005.

And under her leadership, in 2004, Estonia eventually attained her accession to NATO and EU, which was her long-standing wish since her independence in 1991.
H.E. Ms. Ojuland showed the pen actually used for signing for accession to NATO.
The invitation extended to Ambassador Kitaoka this time has come to be a very precious occasion for him to realize one of the most important moments for the Estonian diplomacy so vividly.
Ambassador Kitaoka would like to express his most sincere gratitude to H.E. Ms. Ojuland and Ms. Uus!