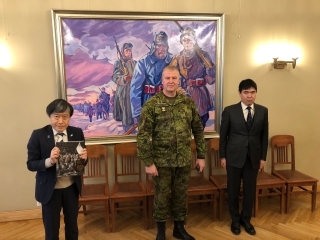 Together with Brigadier General Ühtegi

Logo of Defence League
On 9th March, Ambassador KITAOKA visited the headquarters of the Estonian Defence League, which is located in Tallinn, the capital city, to pay a courtesy call to Brigadier General, Riho ÜHTEGI, the honorable Commander of the League.
The Ambassador was escorted by Mr. Tomotaka YOSHIMURA, a First Secretary in charge of general and political affairs at the Japanese Embassy.

The meeting took place with wearing masks, and keeping enough distance with each other.

The Defence League is a volunteer organization, whose purpose is to protect the Estonian independence, cooperating with the Estonian Defence Force.
The number of its member is 16,000, and together with affiliated organizations, “Women’s Voluntary Defence Organization (Naiskodukaitse)”, “Young Eagles (Noored Kotkad)” and “Home Daughters (Kodutütred)”, altogether 26,000 volunteers are in action.
The latter two organizations comprise volunteer boys and girls aged between 6 and 18.

Recently, the League has also been engaged in various supporting activities to address COVID19 crisis.
Ambassador KITAOKA was deeply impressed by the spirit and the activities of the League members, who make themselves fully prepared for the protection of the Estonian independence through trainings on a volunteer basis, while doing their own day-to-day jobs.

Finally, the Ambassador presented the Commander with Ikebana (Japanese flower arrangement) calendar and a pin badge to commemorate the 100 years of the Estonia-Japan friendship, and the Commander, in return, presented with a photo book introducing the history of the League.

The courtesy call finished in a friendly manner with a photo session.