2019/12/20
On 13th December, Ambassador Kitaoka paid a courtesy call to H.E. Mr. Jüri Luik, the Minister of Defence of the Republic of Estonia.
Ambassador was escorted by Mr. Yoshimura, the Chief of the Political Division of the Japanese Embassy.
Both Minister Luik and Ambassador Kitaoka reconfirmed that the Estonian-Japanese relationship is being strengthened by the mutual visits last year by the Japanese Defence Minister Onodera (at that time) to Estonia, and by Minister Luik to Japan, based on the shared value of their two countries.
Minister and Ambassador further discussed the way to promote further the bilateral defence relationship including the new sphere of “cyber defence”. 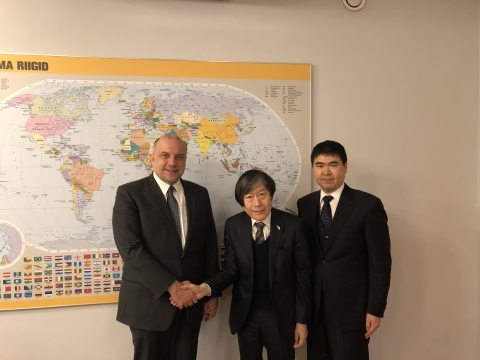 With the Minister of Defence