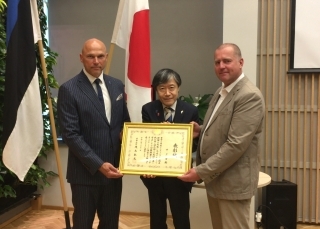 Together with the Mayor and Chairman of municipality council of Saku 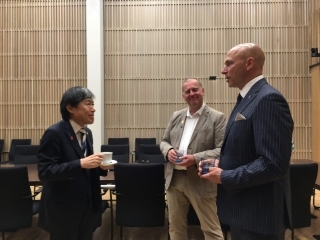 Sharing the joy of the occasion
On 14th June, Ambassador KITAOKA visited Saku Municipality in Estonia to hand the Commendation by the Foreign Minister of Japan.
He was escorted by Mr. Toshifumi ITO, a Second Secretary in charge of culture and public relations of the Japanese Embassy.
Upon the arrival at Saku Municipality, the Ambassador was welcomed by Mr. Marti REHEMAA, the Honorable Mayor of the Saku Municipality, and Mr. Tiit VAHENÕMM, the Honorable Chairman of the Saku Municipality Council, followed by the opening of the awarding ceremony.
The ceremony was also attended by Ms. Siiri RAAGMETS, Municipality secretary, and Ms. Annika KUBJA, officer in charge of Public and Foreign Relations.
Mr. REHEMAA made the inaugural speech to express his gratitude for the awarding of the Commendation, and the Ambassador, after reading the Commendation both in Japanese and English, handed it to Mr. REHEMAA.
It was followed by the speeches made by Mr. VAHENÕMM and the Ambassador.
The Ambassador said in his speech that this year is very special for Estonia and Japan, since it is marking the 100 years of friendship, and the Tokyo Olympic Games are being held.
He also expressed his deep gratitude to Estonia for the Japanese flag hoisting ceremony by the President KALJULAID in January this year, and the decoration given to Mr. YANAGIDA, the Mayor of the Japanese Saku City in February.
The Ambassador also introduced that the preparation works are steadily going on in the Japanese Saku City to welcome the Estonian Olympic athletes as their host town, saying “I am now most pleased that eventually, I have successfully handed over the Commendation, though in a belated manner because of COVID-19”.
It was followed by a photo session, and Mr. REHEMAA presented the Ambassador with “Beer to commemorate the 155 years anniversary of Saku Municipality”.
The ceremony finished in very much a friendly manner! 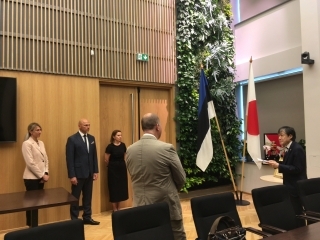 Congratulatory speech by the Ambassador 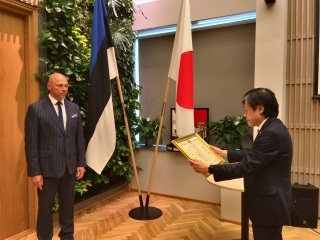 The Ambassador reading out the certificate of commendation