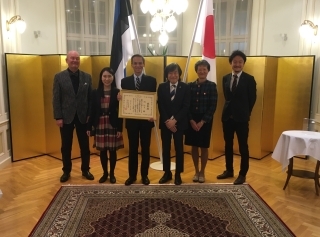 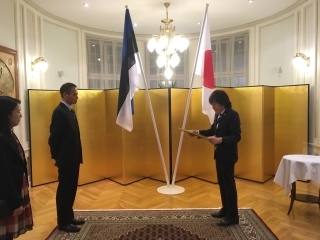 Reading out the Commendation
On 15th October, Ambassador Hajime KITAOKA invited Prof. Tomomi HAYASHI together with his wife to his residence, and awarded “Ambassador’s Commendation” to him for making contributions so actively to the cultural exchanges between Estonia and Japan, as the President of “Japanese Cultural Society in Estonia (Jaapani Kultuuri Koda)”.
Prof. HAYASHI is also well known as an architect.
Prof. Hindrek KESLER, Dean of the Institute of Architecture at TKK, Tallinn University of Applied Sciences, where Prof. HAYASHI is giving a lecture, also attended.
From the Japanese Embassy, Ms. Yuki SAKAI, the Counsellor (Deputy Head of the Mission) and Mr. Toshifumi ITO, a Second Secretary in charge of culture and public relations accompanied.

Prof. HAYASHI, after studying architecture at Yokohama National University, went to the Virginia Tech in the USA to complete his master course, and worked in New York.
In 2001, he moved to Estonia, where he has lived ever after.
While being extensively engaged in design, construction and rehabilitation of famous buildings in Estonia, he has been lecturing as a Professor of Tallinn University of Applied Sciences.
While being active as an architect, he is also active as the President of “Japanese Cultural Society in Estonia)”, and recently, in March this year, his Association hosted “Japanese Language Speech Contest”.
Though held on-line, it was full of lively atmosphere, which charmed all the participants!
And his wife, Ayaka, came to Estonia, “country of singing” , to study the conducting of choir, and now so active as the conductor of “VHK Teachers and Parents Choir”.
Recently in June, she organized “Japan Estonia Virtual Choir” (also attended by some Japanese Embassy staff including the Ambassador!) to commemorate 100 years of friendship between those two countries, which has ended up with a great success!
The Ambassador highly acclaimed the activities of the Association, whose number is so many to be counted exactly!
He also acclaimed Ayaka’s activities, and handed his Commendation to Prof. HAYASHI, saying “though it is addressed to you, please receive it as the one, addressed to you and your wife”.
Prof. HAYASHI responded it by expressing his gratitude.
Then all the participants moved to the dining hall, fully ventilated, and each participant took a seat keeping distance with each other.
All the participants enjoyed conversations on the Estonia-Japan friendship, the activities of Prof. HAYASHI and Ayaka etc.over the authentic Japanese cuisine, cooked by Mr. Takaaki ARAI, the official chef of the Ambassador, who recently received “2021 Foreign Minister’s Commendation as Excellent Executive Chef for Ambassador of Japan”.
The Ambassador would like to express his sincerest congratulation to both of Prof. HAYASHI and Ayaka, wishing for their activities to be continued and further developed!