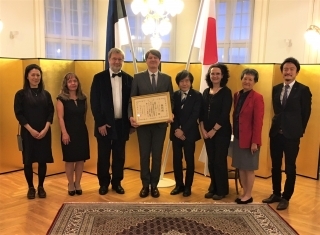 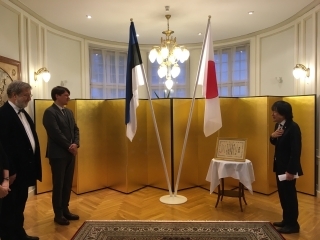 Speech by the Ambassador
On 16th September, Ambassador Hajime KITAOKA held a ceremony at his residence to award “Ambassador’s Commendation” to Japanese Studies Program Unit in Tallinn University.
This Unit originated from Japanese and Japanese Culture Course in Tallinn University, which was founded in 1989.
It has been developing under the leadership of Prof. Rein RAUD, who was awarded “Order of the Rising Sun, Gold and Silver Star”, and now a professor of Asian Studies and Culture Theory in Tallinn University.
Now the Unit is the only department, where a doctorate could be obtained in the field of Japan Studies in Estonia.
The ceremony was attended by Prof. RAUD and his colleagues in Tallinn University, Dr. Alari ALLIK, Lecturer of Japanese Studies and Head of the Asian Studies Academic Field, Dr. Maret NUKKE, Lecturer of Japanese Studies, and two Japanese Language Teachers, Mrs. Akiko MASAKI-KADARIK and Ms. Margit JUURIKAS.
From the Japanese Embassy, Ms. Yuki SAKAI, the Counsellor (Deputy Head of the Mission) and Mr. Toshifumi ITO, a Second Secretary in charge of culture and public relations accompanied.

The ceremony started with the Ambassador’s congratulatory remarks, praising the achievements of the Japanese Studies Program Unit.
He also said that he shall continue to do his best so that the Unit could receive “Foreign Minister’s Commendation” in the future.
After reading it out, the Ambassador awarded his “Commendation”, which was received by Dr. ALLIK on behalf of the Japanese Studies Program Unit.
Dr. ALLIK expressed his gratitude and introduced the precious episode around 1991, just after the recovery of the Estonian independence, when Japan Studies was conducted under Prof. RAUD without proper text books or dictionaries!
Then all the participants moved to the dining hall, fully ventilated, and each participant took a seat keeping distance with each other.
All the participants enjoyed conversations on the present situation of Japan Studies or the Estonia-Japan relationship over the authentic Japanese cuisine, cooked by Mr. Takaaki ARAI, the official chef of the Ambassador, who recently received “2021 Foreign Minister’s Commendation as Excellent Executive Chef for Ambassador of Japan”.
This ceremony and the following dinner proved to be a very precious occasion for the Ambassador to get to know the roots of the Japan Studies in Estonia!
The Ambassador would like to express his sincerest gratitude to Prof. RAUD and all the other participants for accepting his invitation under COVID19! 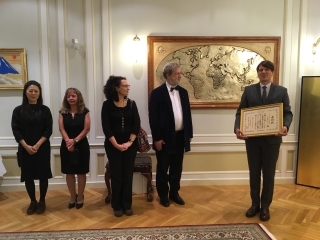 Dr. Allik's expression of his gratitude