Ambassador KITAOKA made his 4th visit to Viljandi for “Cleveron”, producing the most advanced Parcel Terminal 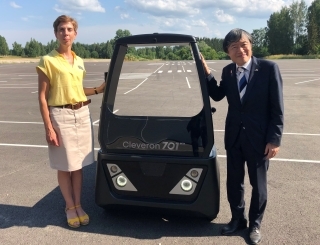 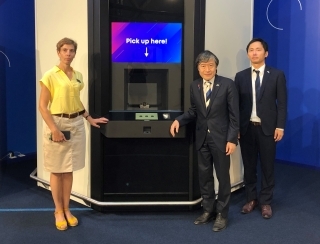 Together with Ms. TOOM
On 12th July, Ambassador KITAOKA made his fourth visit to Viljandi in the southern part of Estonia to visit “Cleveron”, known as the most advanced in producing and selling Parcel Terminals.
He was escorted by Mr. Tomoya SHIGENARI, a Second Secretary in charge of economic affairs in the Japanese Embassy.
Since its foundation in 2007, “Cleveron” has provided 34 countries with the solution for “last one mile problem” (how to overcome the last one mile to the customers, which is the most costly to deliver) by setting up Parcel Terminals.
The number of Terminals, which have been set up, has amounted to 4,600.
The Ambassador was welcomed by Mr. Indrek OOLUP, Co-Founder in charge of Business Development, Ms. Tiia TOOM, Member of the Managing Board, Mr. Remi LÕSSOV, Senior Engineer and Mr. Taavi PURTSAK, Testing Process Specialist.
The Ambassador’s visit started with the demonstration of Parcel Terminal.
The model dealing with smaller parcels to fit the Japanese market has already been completed, cooperating with ITOCHU and Panasonic.
It was followed by another demonstration of the self-driving robot, delivering parcels along roadways, which was also developed by “Cleveron”.
It enables unmanned delivery of parcels weighing hundreds of kg within the radius of 70-80 km, reading traffic lights and avoiding obstacles, to the input address.
The Ambassador praised “Cleveron”, saying “both Parcel Terminal and the self-driving robot have a huge potential in the Japanese market, where still many parcels are received in convenient stores”.
For the Ambassador, who has come across so many futures since he came to Estonia, this visit turned out to be another encounter with the splendid future, which was so precious for him!