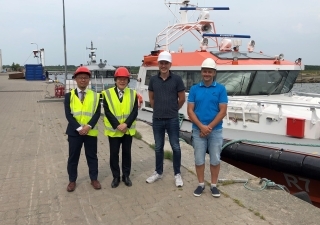 Together with Mr. Lauri BETLEM and Mr. Erik ALEKSEJEV
From 26th to 27th of July, Ambassador KITAOKA made his 2nd official visit to Saaremaa Island, the biggest island in Estonia, following his 1st visit in March last year.
He was escorted by Dr. Hiroshi TAKENAKA, Researcher of the Embassy and a medical doctor.

On the 2nd day of his stay, in the afternoon, the Ambassador visited the Baltic Workboats, which is the biggest Estonian shipbuilding company, exporting its products to 30 countries.
The Ambassador was welcomed by Mr. Lauri BETLEM, Member of the Board, and Mr. Erik ALEKSEJEV, Head of Project Management.
The visit started with the briefing session on the company’s products at the conference room.
The design concept of the company, putting the most emphasis on the comfort of the crew by reducing noise level or smooth acceleration, sounded very attractive for the Ambassador.
It was also impressive for the Ambassador that the company takes control of the whole sales process, from the design to the aftercare, and that the company was cultivating the market only by applying for open tenders, without resorting to PR.
On the future of Saaremaa, Mr. BETLEM said “there is no future, if we only stick to our tradition”.
He further said “longing for our company, ever developing Baltic Workboats, youngsters in Saaremaa have come to recognize shipbuilding as the field for their future challenge”, which was so encouraging for the Ambassador, always expecting the further development of Saaremaa!
The briefing session was followed by a guided tour into various divisions of the company and their shipyard.
Line-up of the boats with light aluminium body equipped with high technology, and almost completed for the delivery, looked very much “Estonian”, which pleased the Ambassador a lot!

The Ambassador’s visit has finished in a friendly manner with a photo session in front of a boat just waiting for the delivery.
The Ambassador would like to express his sincerest gratitude to Mr. BETLEM and Mr. ALEKSEJEV, who spared their precious time for guiding deep into the shipyard!