Ambassador KITAOKA had a meeting with Asia Centre of Tartu University 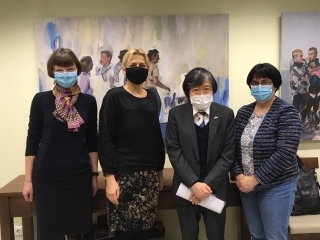 Together with the attendees 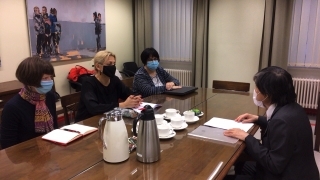 The meeting at the Asia Centre
On 28th October, Ambassador KITAOKA made his 8th visit to Tartu City, and had a meeting with Asia Centre of Tartu University, discussing extensively on the way to strengthen the relationship with Japan and so on.
He was accompanied by Mr. Toshifumi ITO, a Second Secretary in charge of culture and public relations at the Japanese Embassy.

The meeting took place at a conference room of the Asia Centre, where every participant wore a mask, and kept enough distance from each other.
From the Asia Centre, Dr. Elo SÜLD, Head of the Centre, Dr. Eva LIIAS, Coordinator of Japan and Program Director of Contemporary Asian and Middle Eastern Studies, and Dr. Ene SELART, Junior Research Fellow of the Institute of Social Studies and a known expert of Japan study in Estonia, participated.

The meeting started with the briefing by Dr. SÜLD on the present situation and future schedule of the “Asia Strategy Project”, which was initiated under the leadership of the Centre.
The Ambassador highly appreciated the Centre’s initiative on the “Strategy”, which could make the important basis for both of the Estonian government and the private sector to strengthen their relationship with Asia in future.
In the meeting, the participants also discussed extensively on various issues like the prospect of international conferences on Japan and Asia, which were postponed due to COVID-19, the present situation of Asian studies, the cooperation between Tartu University and other universities, the present situation of “CAMES(Contemporary Asian & Middle Eastern Studies program)”, the present situation of Japan related education, the compilation of “Estonia and Japan Relations” and so on.

Eventually, the Ambassador agreed with Dr. SÜLD to keep close contact and close cooperation between the Asia Centre and the Japanese Embassy.

Many thanks to the Asia Centre for welcoming the Ambassador and Mr. ITO under the difficult situation with COVID-19!