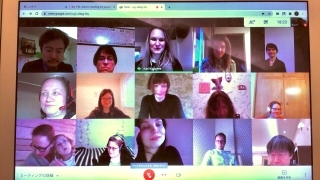 Partisipants in the meeting
Estonian Association of Former University Students of Japan” was founded in 2014.
Last year, its annual meeting took place at the Ambassador’s residence enjoying Japanese cuisine.
But this year, due to the spread of COVID19, it had to be held on-line on 16th March.
Still, it turned out to be successful, attended by as many as 15 participants!

The meeting proceeded, so well chaired by Ms. Anni KAGOVERE, who was re-elected as the President last year, and Mr. Toshifumi ITO, a Second Secretary in charge of culture and public relations at the Japanese Embassy.

Ambassador KITAOKA, in his opening remarks, said “what has been most badly hit by COVID19 is “social occasions”. located between “working hour” and “private time”. But in a sense, “social occasions” could be the most important, since they make “working hour” more creative, and give stimulations to “private time”. This Association is typical “social occasions”, but tonight, we have managed to materialize it on-line. This is something remarkable!”, and sincerely wished for the hosting of this meeting next year at the Ambassador’s residence again.

Then Mr. ITO introduced various events, coming this year, commemorating the 100th anniversary of the Estonia-Japan friendship.
It was followed by lively conversations on the Japanese language speech contest, which just finished on 12th, and each member’s report on his or her own recent activities etc.
Eventually, some members introduced their episodes during their stay in Japan.
More than 2 hours have passed so quickly in such a pleasant atmosphere.
For the Ambassador, this meeting turned out to be a very precious moment to update himself, getting acquainted with the recent activities of his important Estonian friends, who have been supporting the Estonia-Japan friendship at the grass roots level!